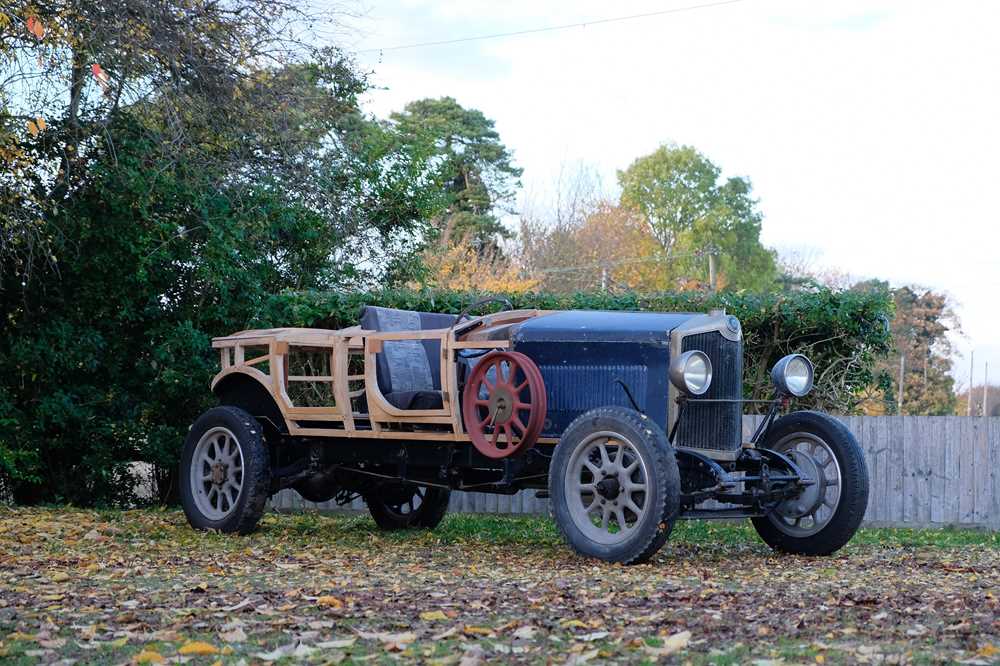 Previously a manufacturer of proprietary engines, Crossley Brothers Limited, of Manchester, built their first motor car in 1904. The first Crossley to make any impact was the A W Reeves-designed 20hp, introduced in 1910. The model was taken up by the military in World War I, seeing service as a staff car, ambulance, and light truck. In the post-war years the company continued to concentrate its efforts on transportation for the middle classes, a policy helped considerably by the marque's popularity with British royalty.

Unlike many rival manufacturers of up-market cars, Crossley continued to favour four-cylinder sidevalve power units for all its models until the advent of the 18/50 in 1926. The 18/50 featured a 2.6-litre, six-cylinder, overhead-valve engine, which was stretched to 3.2 litres in 1928 for the broadly similar 20.9hp model. Mechanically akin to the smaller Crossley 2-Litre, the 20.9hp was built on a 125"-wheelbase chassis, and came with a right-hand change four-speed gearbox. Available in saloon, fabric saloon, and tourer variants, the model lasted until Crossley's demise as a motor manufacturer in 1937.

In 1927, Prince Albert, Duke of York (later King George VI), and wife Elizabeth undertook a Royal Tour to Australia. Their journey by sea took them via Jamaica, the Panama Canal and they journeyed onto New Zealand afterwards. When they sailed into Sydney harbour on HMS Renown on 26 March, they attracted Australia's first gathering of more than one million people. The principal duty of the Prince on this visit was to open the provisional Parliament House in Canberra, on 9 May 1927. They spent twelve days in New South Wales, seven in Queensland, four in Tasmania, eleven in Victoria, six in South Australia, six in Western Australia and three in the Australian Capital Territory, with the remaining 10 for travelling and recreation. They departed the country on 23 May for New Zealand.

The cars supplied for this Royal visit were made by Crossley Cars of Gorton, Manchester. They had a long standing connection with the Royal Family, have previously supplied cars for the Royal Family, with examples being supplied to the King George V, the Prince of Wales (later King Edward VII) and more. For the tour, 12 cars were built with a further 7 for the New Zealand leg in late 1926. These consisted of four limousines, two Landaulet’s and six open tourer’s. The cars were painted maroon with maroon upholstery and decorated with the royal seal on the rear doors. They also had metal seals on the bonnet front; and the cars featured the later 20.9 HP, 3.2 litre six cylinder engine and all had standards attached to the radiator cap to carry the Royal Standard.

After much work cross-referencing the substantial existing records in the State Archives in Canberra, it is believed Chassis 40248 was a Tourer used on the Toowoomba, Victorian and Canberra legs of the tour, of which from an original group of 12, only four have survived, this example was exported to the UK in 1997. One is in the Australian National Museum in Canberra (a Landaulette), a Limousine body exists on a tourer chassis in Sydney, and the third car in Victoria with has survived with minimal remains of its tourer body. The car on offer today has been subject to mechanical overhaul and benefits from a running engine as well as a new frame. Now awaiting the final phase of its restoration, this vehicle presents a very interesting opportunity to acquire a historically important Royal Tour car of Australia. The vendor rates the condition of the bodywork, engine and transmission as ‘Good’ and comes accompanied with a detailed history file, as well as some spare parts.