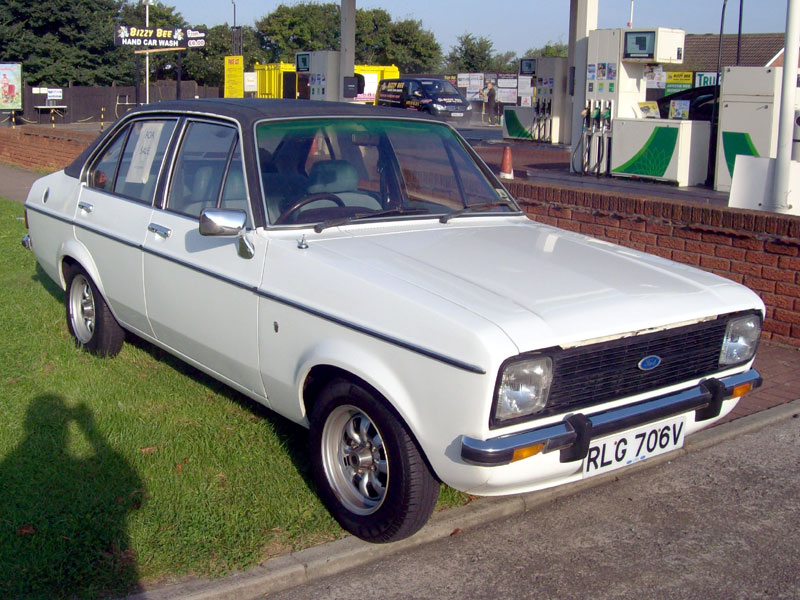 A joint project between Ford's English and German operations, the Escort Mk 2 was developed under the codename 'Brenda'. Entering production on 2nd December 1974 but not officially launched until the following month, the newcomer was somewhat squarer-edged than its predecessor. Based around a monocoque bodyshell equipped with MacPherson strut independent front suspension, a leaf-sprung 'live' rear axle, rack and pinion steering and disc / drum brakes (save for the base models which utilised drum brakes all round), it was powered by a variety of 1.1, 1.3, 1.6 and 2.0 litre four-cylinder engines allied to four-speed manual or three-speed automatic transmission. Available in two- / four-door saloon and estate guises, the Escort Mk 2 proved a great success. In true Ford fashion, the model range had aspirational overtones extending as it did from the modest 'Popular' to the notably plush 'Ghia'; the latter derivative bringing an element of 'personal luxury' to the mainstream. Face lifted during 1978, the Escort Mk 2 remained in production until August 1980 by which time the UK market had reputedly accounted for more than 630,000 sales.

Finished in white with sky blue cloth upholstery and trademark wooden dashboard, this particular example is variously described by the vendor as being in "mint" (bodywork, 1.3 litre engine), "excellent" (electrical equipment, paintwork) or "as new" (four-speed manual gearbox, interior trim) condition. Reportedly always garaged and regularly ziebarted, 'RLG 706V' is further understood to have covered a mere 41,000 miles from new in the hands of only one owner. A comparatively rare survivor, this nostalgia evoking Ford Escort is offered for sale with "full service history".

PLEASE NOTE: This vehicle does not have a current MOT.
Share: