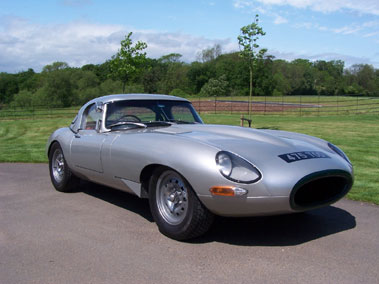 One of the great motoring icons of the last century, Jaguar's E-type is a car that has always inspired loyalty and devotion. Born out of the fabulous D-type racer, the newcomer soon acquired a strong competition heritage of its own (as witnessed by Briggs Cunningham and Roy Salvadori's strong drive to 4th overall in the 1962 Le Mans 24-hours etc). Faster and more glamorous than virtually all its production rivals, it put many so-called 'sportscars' to shame at its 1961 Geneva Motor Show launch. Certainly few could live with its reputed 150mph top speed or the savage acceleration that allowed it to touch 60mph in less than seven seconds. In an age when a decent family saloon could call upon its engine for 65bhp, the E-type's 3781cc, DOHC, straight six claimed an additional 200bhp. While Ferrari's lauded 250 GT SWB and 250 GTO made do with 'live' rear axles, the E-type utilised a sophisticated independent rear set-up with inboard disc brakes. Rack and pinion steering enabled a driver to make the most of the monocoque chassis's excellent roadholding and handling, putting it light years ahead of American designs like the Corvette.

Finished in silver with black leather upholstery, this particular example is described by the vendor as being in "excellent" condition with regard to its 3.8 litre engine, four-speed Moss gearbox, electrical equipment, interior trim, chassis, bodywork, paintwork and wheels / tyres. The fifty-first production E-type Roadster built (or so its quoted chassis number of '850051' would imply), '475 TOD' was manufactured on June 22nd 1961. Dispatched by the factory twenty-two days later, the Jaguar's first recorded keeper was a Mr E.G. Dawes of Torquay (Devon). Reportedly converted to its current Lightweight E-type look-a-like configuration by marque specialists J.D. Classics in 2000 / 2001, the work is understood to have been commissioned by ex Ferrari F1 driver Eddie Irvine and to have "cost in excess of £30,000". Despite sporting a Lightweight-style vented hardtop and bootlid not to mention Perspex headlamp covers, Le Mans-esque front sill darts and Dunlop-pattern peg drive alloy wheels (complete with three-eared 42mm spinners), '475 TOD' has apparently been set-up for "comfortable road / rally use" rather than as a 'balls out' racer.