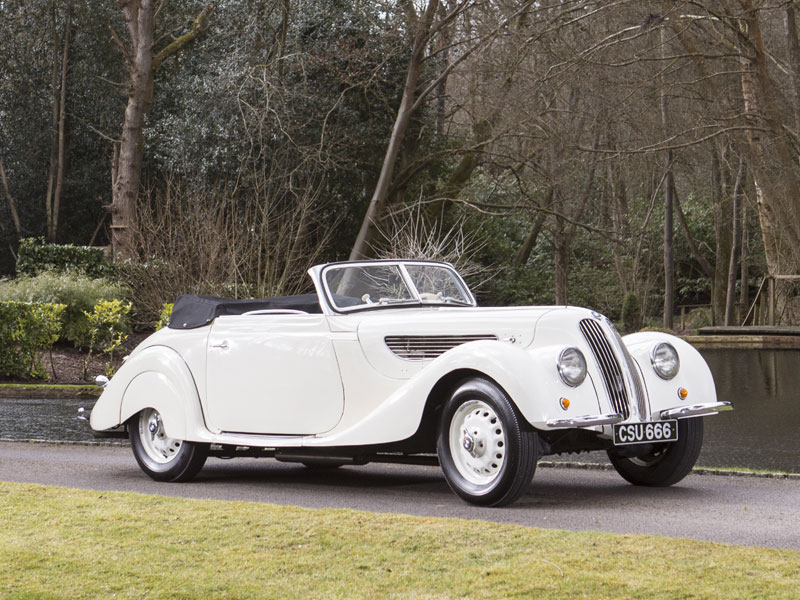 It was in 1934 that BMW began work on the car that would largely underpin its immediate future, the 326. The development was the responsibility of Fritz Fiedler and Alfred Böning and the design that of Peter Schimanowski. It was powered by a six-cylinder OHV engine of 1971cc and featured such advanced technical features as hydraulic braking and rack and pinion steering. It was offered in Saloon, and both two and four-door Convertible guises.

In 1936 came the immortal 328 Roadster, the stunning two-seater that dominated the 2-litre race class in which it competed and achieved outright victory in the 1940 Mille Miglia. Somewhat confusingly, the less dramatic but graceful and highly successful 327 followed a year behind the 328, and was aimed at an altogether different market. A four-seater motorcar based on a shortened version of the 326 chassis, it was offered as a two-door Coupe or Cabriolet. There were two engine options, the more powerful of which utilised the lusty unit from the 328. Records show that 1,965 327s were built between 1937 and 1941, and a further 505 between 1946 and when production of the model ceased in 1955. The styling was again the work of Peter Schimanowski and lent itself to the two-tone paintwork that adorned many examples of the breed.

The magnificent lefthand drive sale car was manufactured by Bayerische Motoren Werke (BMW) in December 1939. It features White Cabriolet bodywork contrasted by White-piped Black interior trim and was equipped from new with the more powerful of the engine options, that's fed by an impressive trio of carburettors. The BMW's history file contains a copy of a previous V5 showing that prior to March 1988 it was owned by an Alan Warner of Itchen Abbas near Winchester. In March 1988 the registration was changed in favour of Waxoyl, then of Radlett, Herts. However, it would seem that to all intents and purposes it was still Warner's car, and it was through him the vendor acquired it in February 1990.

At this point it was entrusted to TT Workshops of Westbury, Wiltshire, who set about restoring the chassis, body, mechanical components and electrical system. The BMW has subsequently been used in Italy, France, Switzerland and the UK without any problems, and the vendor currently classes the bodywork, interior trim, engine and transmission as 'good', and the paintwork as 'fair'. A splendid-looking period BMW of enduringly practical design.
Share: