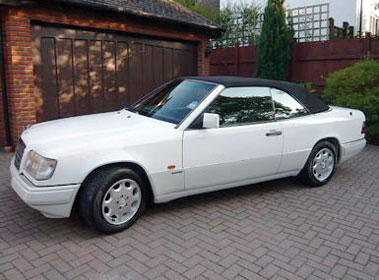 Introduced in 1985, the W124-series was arguably the last Mercedes-Benz model range to have its design parameters laid down by engineers rather than accountants. Faster and more fuel efficient than its predecessor thanks to a monocoque chassis that was stiffer, more aerodynamic and around 200lbs lighter, the newcomer further benefited from revised anti-dive suspension geometry and a sophisticated multi-link back axle set-up. Powered by a wide variety of petrol and diesel engines, W124s could be had in saloon, estate, coupe or cabriolet guises (though, most were specified with automatic transmission regardless of bodystyle). Launched in late 1991, the Cabriolet proved an immediate success thanks to its full four-seater cabin and disappearing power hood (an unusual combination at the time). Re-branded as the E-class in 1993 the W124-series otherwise remained remarkably unchanged throughout its European production life. One of the more sporting variants, the E 220 Cabriolet was fitted with an advanced 2199cc DOHC 16-valve four-cylinder engine that developed some 148bhp and 155lbft of torque. Admirably refined, the model was reputedly capable of 127mph and remained popular even after its CLK Cabriolet replacement arrived in 1998.

Finished in white with black leather upholstery, this particular example is described by the vendor as being in "very good" condition with regard to its engine, automatic transmission, electrical equipment, bodywork and paintwork (while, he rates the interior trim as "excellent"). Showing 97,000 miles to its odometer, 'L212 BPV' is said to possess "a stamped service book to 80,000 miles" plus "an invoice for servicing carried out at 96,000 miles". Benefiting from what contemporary Mercedes brochures called the 'specially tuned suspension' and 'more athletic stance' of the Sportline option pack, this stylish four-seater convertible is offered for sale with MOT certificate valid until March 2010 and current road tax.
Share: