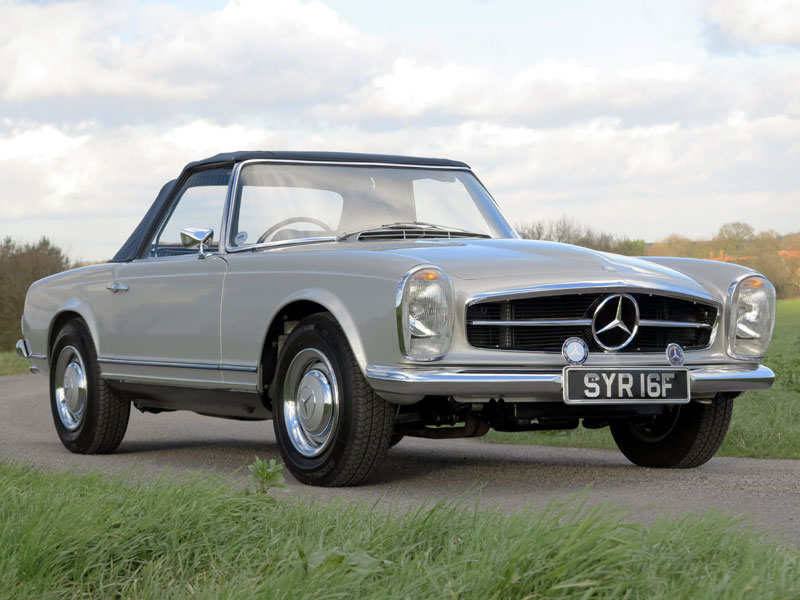 - The nicest W113-series SL that we have yet encountered

- 'Nut and bolt' restoration completed some 16,400 miles ago

- Current ownership since 1993 and winner of 33 awards

Let's not beat about the bush, this is the nicest W113 Series SL we have yet to encounter, and we've auctioned a good number over the years. To put it in perspective, since 1993 it has been in the care of a man who not only acts as a concours judge and valuation official for the Mercedes-Benz Owners' Club, but is such an arch enthusiast for Mercedes-Benz cars, and the 113 Series in particular, that he even renamed his house 'The Pagodas'. Small wonder then that when he set about masterminding a painstaking restoration on 'SYR 16F' in the 1990s, he was intent on making it the best it could possibly be. As a result it has won no less than 33 prizes and was widely regarded as the best Pagoda on display at this year's London Classic Car Show.

A bare metal respray in the original colour of DB180 Silver Grey was carried out by Mercedes-approved bodywork specialist John Clark Bodyworks of Wilton Road, Humberston. The interior trim was all renewed in the original shade of Dark Blue by Aldridge Trimming of Wolverhampton. The six-cylinder engine was thoroughly overhauled by marque specialists Crewe engines of Warmingham while the automatic gearbox, independent suspension and rear axle were similarly rejuvenated - the latter two by the vendor himself, who trained as an engineer before pursuing a new career path. The brightwork was freshened up by Prestige Plating of Barnsley, the hood renewed and the hard top restored. The major parts suppliers involved in the restoration were the main dealer Mercedes-Benz of Grimsby and Roger Edwards Motors - the vendor was a friend of the later Roger Edwards who provided him with help and advice as well as replacement parts.

'SYR 16F' has covered some 16,400 miles since the completion of all the work, including trips to Germany and Switzerland. It is now being offered complete with automatic transmission, power assisted steering, hard and soft tops, a photographic record of the body repairs and repaint, a comprehensive history file containing reams of invoices right down to one for new glovebox mounting brackets, and a current MOT certificate valid until November 25.

The rarest W113 variant, the 250SL, was officially introduced at the March 1967 Geneva Salon. Blessed with the same effortlessly elegant Paul Bracq styling as its earlier sibling, it was powered by a new seven-bearing crankshaft 2496cc SOHC straight-six engine that developed some 150bhp and 159lbft of torque - sufficient outputs to endow the Mercedes with a 0-60mph time of a whisker under 11 seconds and a top speed just north of 120mph. Suspension was independent all-round by double wishbones and coils springs at the front and swing axle, radius arms and coil springs at the rear. Braking was by power-assisted discs on all four corners, and steering by power-assisted recirculating ball. The newcomer's wide track gave notably sure-footed handling.

Able to blur the divide between city streets and open roads with ease, the majority of 250SLs were specified with four-speed automatic gearboxes. Faster than the 230SL which preceded it yet more stiffly-sprung and agile than its 280SL successor, the 250SL remained in production for just a single year, accounting for a mere 5,196 sales worldwide, more than a third of which were exported to America. A cult car by any standards, SLs have had countless celebrity owners from Charlton Heston to Kate Moss, John Lennon to Sophia Loren and Peter Ustinov to Stirling Moss. They have also starred in myriad films, including: 'Tinker Tailor, Soldier, Spy'; 'The Baader Meinhof Complex' and 'Frost/Nixon'.
Share: