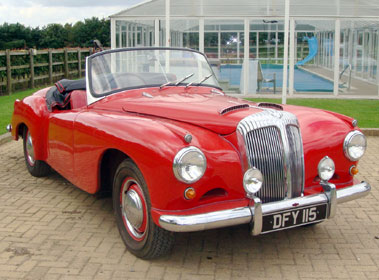 Daimler launched the Conquest Roadster as a logical development of the ash-framed Lanchester Leda. Conquest saloons used a standard steel body, but the Roadster heralded a move to aluminium castings and alloy panelling on the separate chassis making it lightweight, durable and advanced compared to many of the half-timbered offerings from other makers. Carbodies, another part of the BSA consortium that owned Daimler at the time, undertook the build. At launch, price was similar to Jaguar's XK120, but as the run of only 65 roadsters continued, the mass-produced Jaguar became cheaper. The coach built Daimler's cost escalated, resulting in both a very low production run and consequent rarity today for this hottest model in the Conquest range. From 1954 an aluminium head was fitted, with big valves. A higher compression ratio made best us of the move away from 'pool' petrol, and twin SUs offered an improved throttle response on the 2433cc six. The roadster also featured half-inch wider brakes and a quicker steering ratio of 2.5 turns lock to lock, making it the sportiest drive in the Conquest range, already rated in-period as a muscular English performance car.
The vendor reckons this 1954 example requires "some finishing" but adds that it is in "generally good condition with a reasonable interior"; in truth an eminently presentable car displaying Daimler's interpretation of Britain's entry into the jet-age, with dainty vestigial fins coupled to flowing coachwork. The formal D motif dominates the centre of the sprung Bluemels type steering wheel and leather seats confer the quality expected of a car bearing a royal warrant. Performance figures were strong, with a 100mph maximum and the 60mph dash coming up in 14 seconds, making this Conquest an unassailably usable touring car today, well able to cover long-distances at pace in great comfort. Early 1950s drop-tops are experiencing a resurgence of interest for their drivability and technological advances coupled to traditional styling and build-quality values. This Daimler's rarity confers an extra desirability, and the four-speed pre-selector gears will transport the new owner back to an era when the finest cars available were both powerful and dignified.
Share: