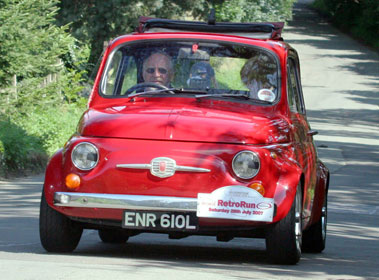 The Nuova 500 was designed by Dante Giacosa, the man also responsible for its predecessor, the Cinquecento or Topolino (little mouse) as the public immediately christened it. Time has shown the Nuova 500 to be a masterpiece of packaging, the rear-wheel drive, rear-engined layout leaving a remarkably uncluttered cabin with adequate room for four passengers, despite the car's diminutive length of just 9.74ft. At its introduction in July 1957 the little Fiat was powered by a twin-cylinder engine of 479cc, the maximum power of which was a mere 13bhp. However, with a dry weight of just 470kg, the car could nevertheless exceed 50mph and average up to 60mpg. Tough, economic, reliable and sensibly-priced, it made car ownership a reality for millions for whom it had previously been a mere dream and a 500 was the first car for countless teenagers - Grand Prix drivers Michael Schumacher and Jean Alesi among them. The final iteration of the 500 rolled off the production line in 1975, by which time no less than 3.6 million had been built. By this stage, the engine capacity had grown to 594cc and the power output to 18bhp. Carlo Abarth's eponymous company had been synonymous with fast Fiats from as early as 1949 and he was quick to see the potential of the 500, exhibiting performance versions at the Turin Motor Show within months of the car's introduction.

The example offered here is an evocation of such cars. Built and maintained with the assistance of UK-based Abarth specialists Middle Barton Garage, `ENR 610L' sports a modified 650cc engine with Abarth cam, downdraught twinchoke Dellorto carburettor and sports exhaust. As befits the considerable extra performance these endow, the car features lowered suspension and extended wheelarches under which nestle wider than standard tyres mounted on attractive Minilite style wheels. Under the same ownership for the last 10 years, the Fiat has benefited from considerable improvements all-round. Three years ago the floor pans, outer sills and jacking points were all replaced and the car treated to a new coat of Rosso Corsa paint and underseal. At the same time, various brake and suspension items were renewed as required and in recent weeks the engine has been stripped and fitted with new big-end shells and oil pump. The car is said to be a delight to drive and comes with a brand new MOT and year's tax - ie ready for a summer of fun.
Share: