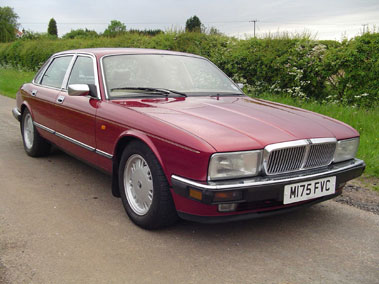 Shortly after finalising its £1.6 billion takeover of Jaguar in early 1990, Ford instigated a major new quality control drive at Browns Lane. Among the first beneficiaries was the recently revamped XJ6 model range. As well as a choice of larger 3.2 DOHC and 4.0 DOHC AJ6 straight-six engines, those contemplating Britain's best-selling executive car were confronted by a new dashboard (complete with analogue rather than digital instruments) and improved door handles / higher security locks. Though, the excellence of the basic design's all-round independent suspension, power-assisted rack and pinion steering and four-wheel disc brakes meant that 'under the skin' changes were kept to a minimum. Although not as fuel efficient as its 3.2 litre sibling, the 4.0 litre powerplant boasted notably more horsepower (223bhp), torque (278lbft) and performance. Equipped with Jaguar's renowned four-speed automatic 'J-gate' transmission as standard, the bigger-engined XJ6 was reputedly capable of 0-60mph in 7.9 seconds and 141mph.

Finished in Cranberry Red metallic with light beige leather upholstery, this particular example is variously described by the vendor as being in "all good" (electrical equipment), "very good" (engine, automatic transmission, chassis, wheels / tyres), "unmarked" (interior trim, bodywork) or "immaculate" (paintwork) condition. Reportedly fitted with such niceties as "an electric sunroof / windows / seats, alloys, front fogs, cruise control and remote locking", 'M175 FVC' is further said "to drive very well with no known faults". Considered by the seller to be "without doubt one of the best examples available today", the saloon is understood to have covered some 82,400 miles from new. An inexpensive entry into the world of luxury motoring, this smart Jaguar is offered for sale with "full service history" and MOT certificate valid until November 2007.