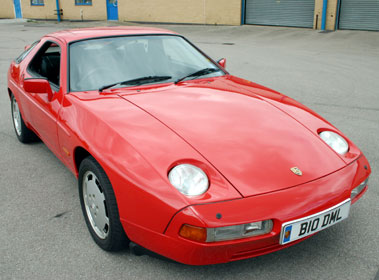 Bearing in mind the phenomenal demand for Porsche's 911 that continues today, it is hard to credit that the 928 was its intended replacement. As early as 1971, the board felt the 911 would soon reach the pinnacle of its development and that its successor should be larger and more upmarket. Many options were researched but, much to the amazement of the Porsche purists, it was a front-engined, water-cooled, V8-powered 2+2 that was launched at the 1977 Geneva Motor Show and which won the 1978 Car of The Year Award. Production of the 928 continued until 1995, by which time some 61,000 examples had been made. The 928 is a fine car with many devotees worldwide. Moreover, though the model's development over its 18-year lifespan was quite subtle, it was nevertheless continuous and effective and a good late car is a joy to own and impressive even by today's standards. At launch, the all-alloy engine was 4.4 litres in capacity and produced some 240bhp. The galvanised steel monocoque frame was suspended on double wishbone coil-sprung suspension at the front and lower wishbone with upper transverse link and coil springs at the rear. The car featured ventilated disc brakes all round, while the gearbox was rear mounted and integral with the axle. The S4 variant was introduced in 1987. It had a 5.0-itre engine producing 320 bhp. It featured a number of mechanical upgrades over the outgoing S2 / S3 and was distinguished by its new bumpers and rear spoiler.
The example on offer is a 1988 S4 finished in Guards Red with grey upholstery. Described by the vendor as being in "good" condition with regard to its engine, automatic transmission, electrical equipment, interior trim, bodywork and paintwork, 'B10 DML' is further understood to have been the subject of a respray during December 2007 and to have covered very few miles over the past few years. Apparently the Porsche comes complete with "a full service history", old MOTs dating back to 1993 and a current certificate valid until August 2010. Plus it has the added bonus of a Foxguard security system.
Share: