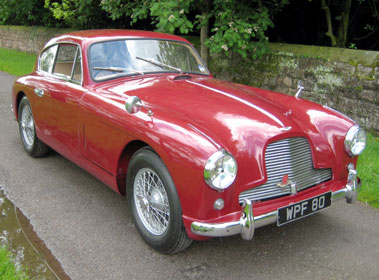 "The Aston Martin DB2/4 is a sports car with a very definite appeal. It has full saloon car comfort, coupled with performance and roadholding of a very high order, yet in spite of its very good performance the fuel consumption was not excessive" (Autocar)

Introduced at the October 1953 London Motor Show, the DB2/4 represented a new breed of family friendly Aston Martin. Some seven inches longer and marginally taller than its predecessor, the fitting of a more compact seventeen-gallon fuel tank (still good for circa 300 miles) plus some minor platform changes liberated enough room for two small seats to be positioned above the back axle. Visually distinguished by a one-piece windscreen and rear hatchback, the new model boasted such niceties as a telescopic steering column and adjustable backrests. Panelled in lightweight aluminium over an advanced tubular chassis frame, the model featured all round coil-sprung suspension (independent front / beam axle rear) and four-wheel drum brakes. Initially powered by a 2580cc version of the famous Willie Watson / W.O. Bentley designed DOHC straight-six engine, the adoption of a larger 83mm bore saw capacity rise to 2922cc in mid 1954. Credited with 140bhp and 178lbft of torque in standard tune, the DB2/4 3-litre was reputedly capable of 120mph. Overshadowed by its racing DB3 / DB3S siblings, the model still enjoyed a successful competition career winning the team prize on the 1955 Monte Carlo Rally. Only available in two-door saloon or drophead coupe guises, a mere 565 DB2/4 MKIs are thought to have left the Feltham Works.

Resident in Herefordshire prior to entering the current family ownership some twenty-two years ago, this particular example - chassis number 'LML830' - is said to have been rendered roadworthy again via "a partial restoration and sympathetic recommissioning". While, the early 1990s reportedly saw it stripped back to bare metal with any corroded areas thus revealed being replaced as part of an extensive cosmetic refurbishment. Repainted in its original maroon livery (as confirmed by a copy factory build sheet), the Aston Martin also benefited from a complete retrim utilising beige leather upholstery and correct Wilton-type carpets not to mention the installation of a new braided wiring loom, rejuvenated fuel pump and fresh wiper motor. The subject of a major overhaul in 2006-2007 by specialist Martin Cheetham, the original 3-litre DOHC straight-six is understood to have been treated to "a reground crankshaft, replacement shell bearings, fresh cylinder liners, new pistons and modified oil ways". Other work carried out around the same time apparently included overhauls of both the brake system and front suspension. A veteran of several Norwich Union / AXA runs, 'WPF 80' journeyed to Sweden for a 2007 AMOC event. Summed up the seller as being in "generally good usable condition", this desirable DB2/4 is offered for sale with MOT certificate valid until April 2010.