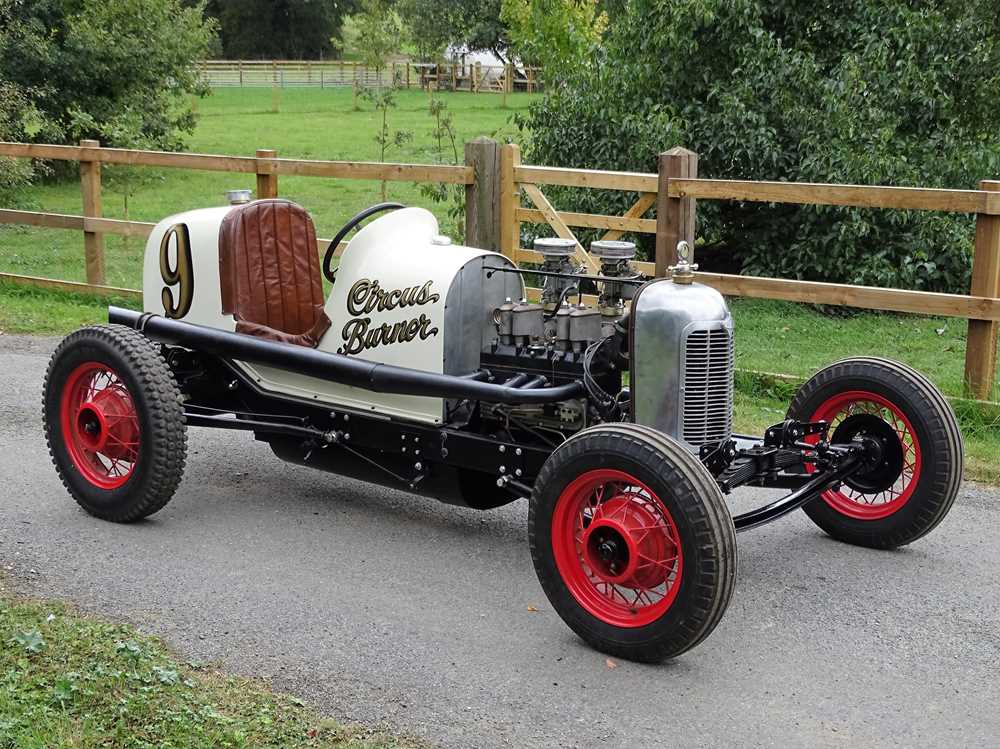 
Registration No: N/A
Chassis No: Not Stated
MOT: N/A

A letter on file dated February 28th 1997 from Fred Sherk who was not only a previous owner of the ‘Circus Burner’ but also served on the board of directors for The Eastern Museum of Motor Racing in Harrisburg, Pennsylvania makes for interesting reading:

‘From the body style and the fact that it was steel, it was evident to me it was a car from the 1920s / 1930s era . . . The car’s frame is from an Essex automobile. These frames were especially popular among early race car builders because of the graceful kick-up at the rear and the tapered side rails . . . As I recall, the car also had Franklin steering which would be correct for a racer of this vintage. The nose, which strongly resembles the type seen on Miller race cars, is not unusual . . . In summary, having restored six sprint cars ranging in vintage from 1933-1956, I would say the main parts of the car indicate it was a real racer’.

hibernation, the single-seater was restored with a McDowell DOHC engine and returned to competitive usage. Belonging to Jack Hansell of New Jersey thereafter, the sprint car was bought by Bill and Fred Sherk in conjunction with Pittsburgh dealer Jim Etter. The Sherks removed the McDowell DOHC powerplant for a Dreyer single-seater they were reviving and Etter sold the resultant rolling chassis to Joe Cagiono of New Jersey who fitted another heavily modified Ford engine and took the ‘Circus Burner’ racing again.

Purchased from Cagiono by Mike Holt who imported it to the UK on behalf of Ian Denny in 1989, the single-seater passed to F3 500cc authority Rodney Cummings eight years later and into Paul Hobb’s possession during 1999. Mr Hobbs obtained a stamped Vintage Sports Car Club Eligibility Form for the sprint car that July. Advertised for sale by dealer Paul Shipley in 2013, the ‘Circus Burner’ has not long emerged from a full mechanical and cosmetic restoration. As well as reworking the steel body and finishing it in period colours with hand painted detailing, renowned pre-WW2 Ford specialists Belcher Engineering Ltd of Norfolk went through the chassis, transmission, suspension and brakes not to mention building a special Ford Model A derived engine.