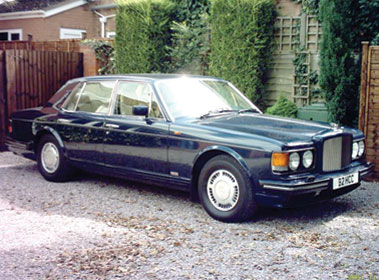 An evolution of the established Mulsanne Turbo, the Bentley Turbo R was introduced at the March 1985 Geneva Motor Show. Visually distinguished by its front air dam and alloy wheels (a marque first), the newcomer further benefited from stiffer anti-roll bars, recalibrated shock absorbers and sharper steering. Easier and more enjoyable to drive quickly, its superior dynamics sounded the death knell for the older car. Although, Bentley was coy about releasing specific outputs, other sources suggested that the Turbo R's force-fed 6.75 litre OHV V8 developed some 320bhp and 455lbft of torque. Equipped with three-speed automatic transmission as standard, the four-door super saloon was reputedly capable of 0-60mph in under seven seconds and 135mph. Trimmed with the same skill and attention to detail as any other Crewe built car, its cabin was adorned with thick leather hides, rich wood veneers, polished chrome fittings and plush carpets. Upgraded with Bosch Motronic fuel injection and ABS brakes during 1986, the model was further reworked for the 1989-model year gaining quad headlamps and an increased 145mph top speed.
Finished in metallic blue with cream leather upholstery, this particular example is described by the vendor as being in "very good" condition with regard to its engine, automatic transmission, electrical equipment, interior trim, bodywork and paintwork. Stated to have had three former keepers - albeit that the accompanying V5C Registration Document shows five due to a period of export / changes of address - 'B2 HCC' is further understood to have been "main agent serviced up to 41,000 miles and maintained by its owners since then who were both motor engineers". Reportedly accumulating just 23,000 of the 64,000 miles shown on its odometer during the last ten years, the Bentley is said to have been "the previous custodian's pride and joy" and to "drive well returning 20mpg overall without too much trouble". Apparently "treated to dry storage in winter months" and boasting seats that have never been connolised, this smart Turbo R is offered for sale with a fresh MOT certificate.
Share: