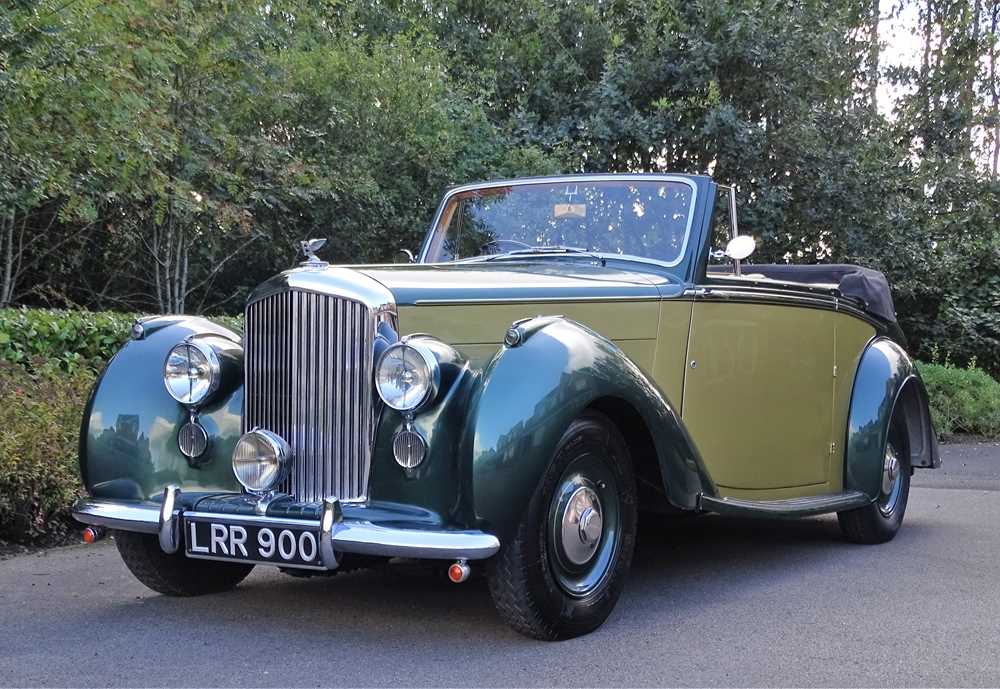 First registered in Nottinghamshire on 14th September 1950, chassis B221HP had migrated to Oxfordshire via Leicestershire and Bournemouth by the time the vendor acquired it some forty-one years later. A non-runner that had lain idle in a wooden shed since September 1978, the Bentley was soon found to be riddled with rot. With its Standard Steel Saloon coachwork removed, the car was treated to an extensive mechanical restoration during which ‘every working part on the engine, chassis, transmission, suspension, brakes and steering etc was either overhauled or renewed’. Just as this mammoth task was coming to an end, the seller spotted a picture of a rather smart re-bodied MKVI Convertible in the August 1994 issue of the Bentley Drivers’ Club Review magazine. Further enquiries saw him speaking to the Convertible’s creator Derek Leyshon-James. A professional time served coachbuilder, Mr Leyshon-James revealed that he had re-bodied ten or so MKVI chassis as well as numerous Derby Bentley and Rolls-Royce 20/25 ones.

Having visited Mr Leyshon-James’ premises in Eaton Bishop near Hereford, the vendor commissioned him to craft the Bentley’s current Three Position Drophead Coupe coachwork complete with separate rear boot and fully lined hood. The steel bonnet, front wings, fire wall, scuttle, front floor panel, A-posts and windscreen pillars are all MKVI parts but the rest of the body from the front door jams back is made in the traditional manner with ash frames supporting aluminium panelling. Fabricating, painting and trimming the body took eighteen months from June 1995 – December 1996 and cost some £29,551.67 (a fraction of what would be charged today). Reunited with ‘LRR 900’ the seller undertook various electrical works and finishing touches before returning it to the road in March 1997. A multiple concours award winner, the stunningly rebodied MKVI added to his trophy cabinet when it took ‘best-in-class’ at the Bentley Drivers’ Club’s Broughton Castle Concours d’Elegance meeting four months later.

A testament to the quality of its renovation, the Drophead Coupe has provided thousands of miles of trouble-free motoring throughout the UK and Europe. Participating in the Royal Automobile Club’s three-day Centenary Run during 1997 and covering 2,800 miles across seven countries as part of the Bentley Drivers’ Club’s Millenium Tour of Europe, ‘LRR 900’ has twice been to the French / Spanish Pyrenees as well as to countless destinations in the UK. Regularly serviced and maintained, the vendor believes the Bentley to be in ‘excellent running order’. Given a major service by Fearon Rolls-Royce & Bentley Specialists of Newcastle-upon-Tyne in February 2020 at a cost of £1,612.31, the same company refurbished the gearbox-driven brake servo during July 2020. Valued by the Bentley Drivers’ Club at £100,000 for insurance purposes and illustrated in Bernard L King's 'Bentley MK VI' book (p.352), this decidedly handsome MKVI Drophead Coupe is worthy of close inspection. Offered for sale with copy chassis records, copy continuation logbook, V5C Registration Document, history file and photo album of the restoration.

Introduced in 1946, the MKVI was Bentley's first post-war model. Aimed at the emerging 'owner-driver' luxury car market, the newcomer was closely based on the 1939 MKV (of which only fifteen were produced). Built around a massive cruciform-braced chassis with independent front suspension and a leaf-sprung 'live' rear axle, it was fitted with a freshly developed 4257cc OISE (overhead inlet side exhaust valve) straight-six engine mated to a four-speed manual gearbox. Capable of over 100mph when clad in the factory's understated 'standard steel saloon' coachwork, the MKVI quickly developed a reputation for being a refined yet responsive drive. However, despite the excellence of the 'basic' car, there remained a core of marque enthusiasts who found its styling too anonymous.