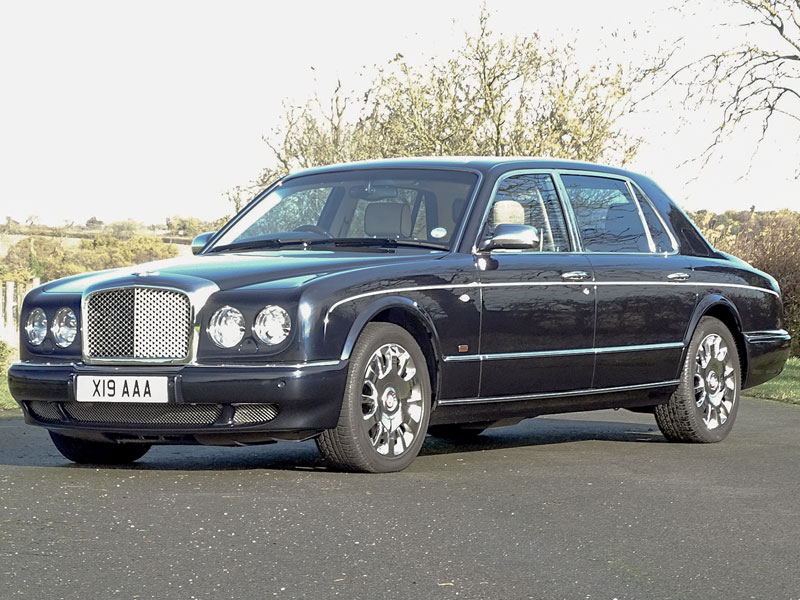 - One former keeper and 4,800 recorded miles

'Launched in 2001, the Arnage RL is the culmination of world-class coachbuilding that spans generations. It is a car that takes personalisation to a new level, where the vehicle is a canvas on which you can paint your vision. With its extended wheelbase, 2 inches (50mm) to the front and 8 inches (200mm) to the rear compartment, the RL retains the classic Arnage profile whilst offering even more palatial comfort for the passengers. But make no mistake; this is a car to drive. The turbocharged 6.75-litre V8 engine, harnessed by a highly engaging automatic gearbox, makes this an experience impossible to miss. The Arnage RL gave its owners the opportunity to realise virtually anything imaginable - all designed and handcrafted by the most skilled automotive artisans in the world. These are people who understand not only the heritage of Bentley, but also the pleasures of luxury in a contemporary world. From fashioners of burnished walnut and fine hides to the audio experts who can turn the interior of a Bentley into a concert hall, to specialists who can bring the cinema or television to the rear seat' (Bentley Motors).

Just 383 examples of the 'Arnage RL by Bentley Mulliner' (to give the model its full title) were handbuilt from 2001 - 2011. None were to standard specification because each one was personalised according to the whim and taste of its first owner. With a clientele that included heads of state, A-list celebrities and the mega wealthy, the Crewe firm sought to ensure that its flagship four-door saloon / limousine could offer an unrivalled interior ambience. As well as a 250mm wheelbase (though, 450mm and 728mm stretches were available too), the Arnage RL gained uprated brake and suspension systems. Powered by a thoroughly revised, twin-turbocharged version of Bentley's iconic 6.75-litre V8 engine allied to automatic transmission, it was reputedly capable of 0-60mph in 6.2 seconds and 155mph (unless armoured to B6 specification, a c.£250,000 option!) Less ostentatious than a Rolls-Royce Phantom but in many ways no less beguiling to be chauffeured around in, any Arnage RL remains a very special motor car.