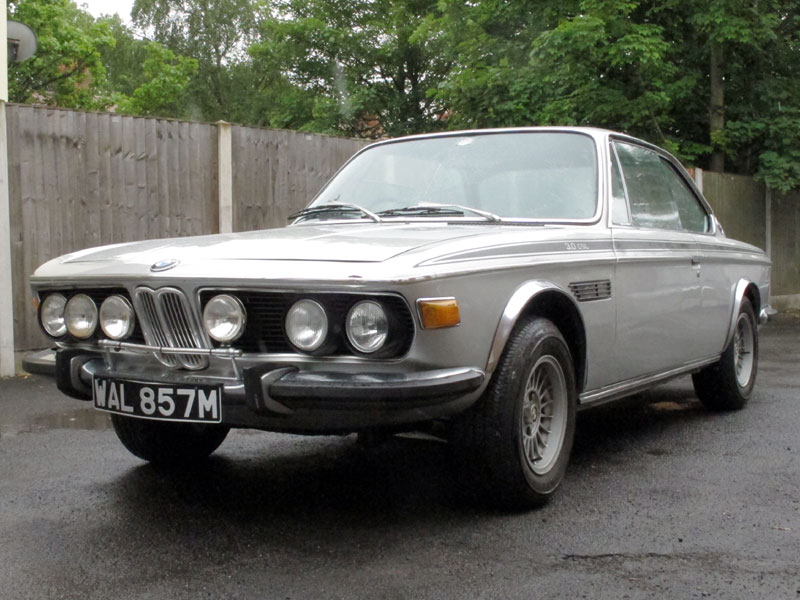 Conceived as a homologation special, the 3.0 CSL won the European Touring Car Championship in 1973 and every year from 1975 to 1979 inclusive. 1 of only 500 examples built to right-hand drive specification, chassis 2285486 was first road registered by Nottinghamshire County Council on 3rd September 1973 (or so its `WAL 857M' number plate would imply). Showing just four former keepers to its V5C Registration Document, the BMW belonged to the late Mr Robert Johnson of Lytham St Annes from 1988 - 2014. Reportedly re-shelled (using a 3.0 CSA donor) shortly after acquisition, Mr Johnson's custodianship is further understood to have seen `WAL 857M' fitted with a replacement factory remanufactured engine before being laid-up during 1999. Mr John Castle of the BMW CS Register has kindly informed us that such `factory remanufactured' powerplants typically benefited from the following new parts: engine block, crankshaft, v-belt pulley, vibration damper, cylinder head (including camshaft and valve train), rocker cover, timing chain cover, sump, oil pump, water pump and thermostat etc. A 3.2 litre Bosch D-Jetronic fuel-injected M30 unit, the straight-six is said to (a) have been got running last year after fuel was introduced directly into its inlet manifold and (b) have covered a modest post-installation mileage. Sporting an authentic CSL-type three-spoke leather-wrapped steering wheel, Scheel sports seats, alloy bonnet/boot/doors and Alpina wheels, the Coupe also has the number 04DA4917994 stamped into its offside top strut (intriguingly Alpina later used the same location for build numbers while their UK agents were Sytners of Nottingham). Showing an unwarranted 29,517 miles to its odometer, `WAL 857M' entered the current ownership via our June 2014 Rockingham Castle sale for £14,972. Sadly ill health has prevented the vendor from undertaking the recommissioning / restoration work that this appealing BMW requires. Offered for sale strictly as viewed, it is accompanied by a UK V5C Registration Document and sundry paperwork.
Share: