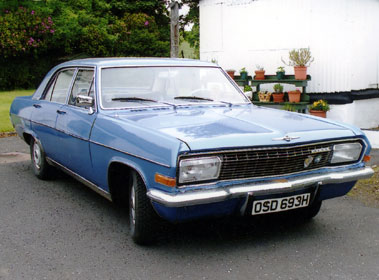 A credible rival to the likes of the Mercedes-Benz W110 / W111 `Fintail', Fiat 2300, Volvo 164 and BMW E3, the Opel Admiral was introduced in 1964. An imposing square-cut saloon, its capacious four-door monocoque bodyshell played host to independent front suspension, a `live' rear axle, recirculating ball steering and servo-assisted brakes. Initially powered by a 100hp 2.6 litre OHV straight-six, the newcomer could later be had with a 125hp 2.8 litre CIH straight-six or even a 190hp 4.6 litre V8 (the 2.8 litre and 4.6 litre cars boasting 100mph plus performance). A potent status symbol in 1960s Germany, the Admiral sat above the Kapitan but below the Diplomat in Opel's executive range. As the product of a GM subsidiary, it exuded a somewhat transatlantic feel and imposing road presence. Well-equipped, tough and dependable, the so-called `A' type Opel Admiral remained in production until 1968 by which time some 55,876 had been made.
The Scottish vendor ordered this particular example, a left-hand drive 2800S model, whilst in Beirut and collected it from Opel's Ruesselsheim Works on 10th May 1966. Catalyst for an impromptu family holiday, the Admiral was driven back to the UK via Holland, Germany, Austria and Switzerland. Having dutifully followed its first owner to Kuwait on business, plans to sell the four-door saloon there were thwarted by the outbreak of the Arab-Israeli Six Day War June 5th - 10th 1967. With tensions in the Middle East reaching fever pitch, the Opel beat a hasty retreat to Scotland traversing Iraq, Iran, Turkey and much of Europe during the course of an epic 4,850 mile journey. Leading a somewhat quieter life over the past four decades save for a bit part in the BBC film `Tinker, Tailor, Solider, Spy', `OSD 693H' is said to have covered some 132,274 kilometres from new (approximately 82,500 miles). Treated to a pair of fibreglass replacement front wings in August 1989 and a respray some six years ago, the Admiral is described by the seller as being in "good overall" condition with regard to its 2.8 litre engine, four-speed manual gearbox, electrical equipment, interior trim, bodywork and paintwork. A rare survivor, this well-travelled Admiral is offered for sale with MOT certificate valid until December 2009 and historic class (free) road tax.
Share this page: