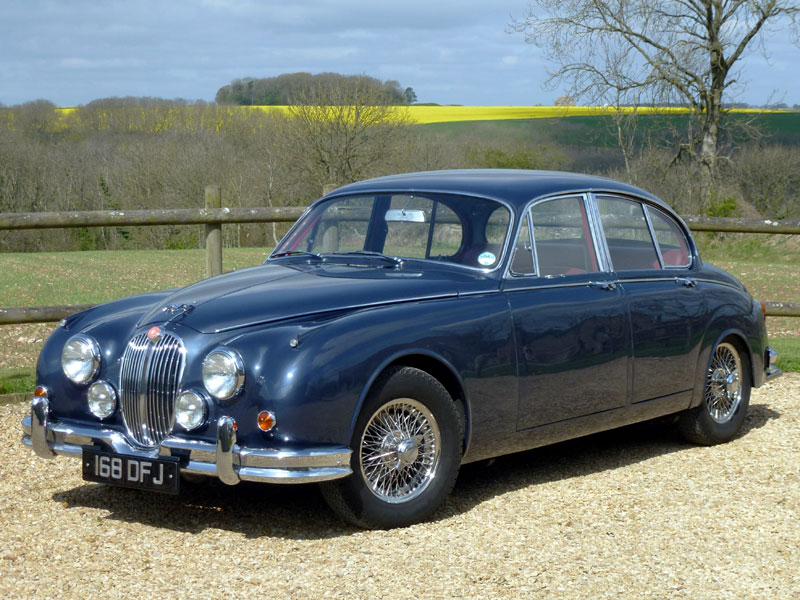 - A matching numbers Manual Overdrive example with a recorded mileage of just 44,000, documented restoration 2001 to 2005 with a thorough engine and gearbox rejuvenation in 2012 / 2013

The Jaguar Daimler Heritage Trust Production Record Certificate states this MkII 3.4 Manual was manufactured in May 1961 and fitted with overdrive. It was sold new to Mr J Pitts of John Pitts and Sons Limited, Trews Weir Paper Mills, Exeter. A copy of an early V5 document shows it being owned by a Mr Anning of Honiton Clyst Garage, Exeter, and a 1983 MOT certificate (carried out by Honiton Clyst Garage) states the odometer reading as just 34,989 miles. Possibly soon afterwards the car was stored at a friend's farm until 2001, when the farmer apparently applied for a V5C in his name and promptly sold the car to a Mr and Mrs Lawrence of Worksop, Nottinghamshire. Mr Lawrence wrote a detailed account of his purchase and restoration of the car upon completion of the work in 2005, which was clearly done to a very high standard. New door skins and bottoms, inner and outer sills, and several new repair panels were fitted, plus new seat cushions were fitted below the preserved original leather on the reclining front seats, along with new carpets and a headlining. The interior woodwork was restored and a new wiring loom fitted, along with a conversion to alternator charging. The paint was superbly applied by Jaguar restoration specialist Alan Proctor of Worksop. The car changed ownership in 2007 and by September 2012 it had been acquired by the vendor. Just prior to the owners purchase the gearbox was overhauled at a cost of over £5,000 and the vendor has significantly improved the car further by having the engine (the original unit) and carburettors overhauled by Peter Chambers Automotive in 2013, at a cost of nearly £19,000. With just 44,000 miles recorded on the odometer, the vendor describes this beautiful MkII was being in "excellent" condition with regard to the body and paintwork, interior, and engine and transmission. The car is supplied with a comprehensive history file with a detailed typed account of the restoration, photographs of the car before and during the work, photographs of the engine overhaul, a spare set of Coombs style rear wheel arches, and the later power steering system that the vendor had removed to improve the steering feel.
Share: