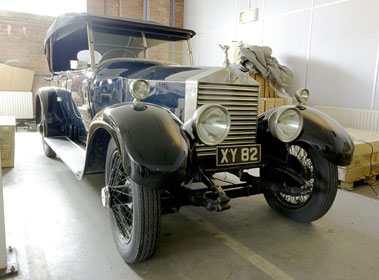 Intended to broaden the marque's reach beyond the fabulously rich to the merely very wealthy, the Rolls-Royce 20HP was introduced in 1922. A more radical design than its illustrious 40/50HP Silver Ghost sibling, the newcomer was based around a 10ft 9in wheelbase ladder-frame chassis equipped with all-round semi-elliptic leaf-sprung suspension, rear-wheel brakes and fully floating 'Hotchkiss Drive' back axle. The first Rolls-Royce engine to feature overhead valvegear, its 3127cc straight-six was designed to run at anywhere between 150rpm and 3,500rpm. Notably quiet, it was mounted in unit with the clutch and three-speed manual gearbox. Though, the provision of a centre ball change gearlever was deemed excessively modern and American by some! Priced at £1,100 in bare chassis guise, the 20HP was not only less expensive than the Silver Ghost but also lighter and more responsive to drive too. Progressively updated with a four-speed manual gearbox and all-wheel braking, the 'baby' Rolls remained in production until 1929 by which time some 2,940 are thought to have been made.

According to John Fasal's authoritative tome 'Rolls-Royce Twenty', this particular example - chassis number 'GRJ 69' - originally carried Three-Quarter Drophead Coupe coachwork by Barker. Supplied new to Sir William McLintock, it is understood to have been rebodied by I Wilkinson & Son Ltd of Derby as part of an extensive restoration that was carried out during 1971. A particularly attractive car modelled after one of Barker's famed 'barrel-sided' designs, it sports such niceties as a three-piece windscreen and full-length running boards. Finished in blue over black with black leather upholstery, the Tourer is described by the vendor as being in "very good" condition with regard to its engine, four-speed manual gearbox, electrical equipment, interior trim, coachwork and paintwork. While, he concludes that 'GRJ 69' "runs very sweetly" and would make "an excellent car for tours and rallies etc".

PLEASE NOTE: This vehicle now has an MOT until May 2010.
Share: