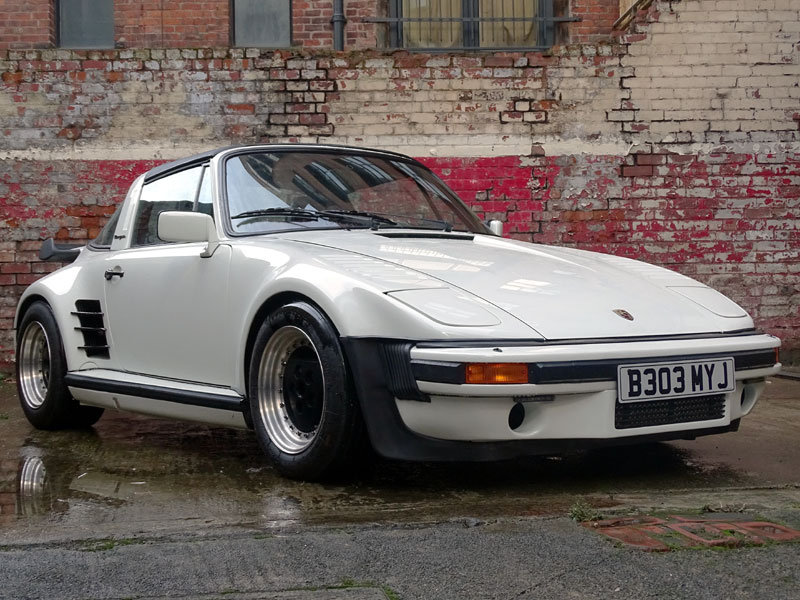 Porsche's ubiquitous 911 has come in many guises over the years, though this is probably one of the more individual examples to pass through our hands. It started life as a standard 1985 3.2 Targa, but prior to the vendor's purchase in 2014 it was treated to a G Force 'slant nose' conversion at a cost of c.£25,000, which was apparently achieved using original OEM parts. The Porsche's wheels have also been upgraded, and in place of the standard Fuchs alloys, it now features rare Oscam Type 806 (Rennsport) ones - 10x15 inch at the rear and 8.5x15 inch on the front. The Targa has comprised part of the vendor's collection of cars and, though it's seen little use in his care, has been treated to a partial restoration. He now classes the bodywork and Grand Prix White paintwork as 'excellent' and the Red leather interior trim, flat-six engine and G50 five-speed manual gearbox as 'very good to excellent'. The indicated mileage of just 41,000 is apparently substantiated by the considerable level of accompanying paperwork. Treated to a recent Targa roof renovation using original Porsche supplied kit, 'B303 MYJ' also comes with an MOT valid to June 6, 2017.

The 911 Carrera 3.2 made its debut at the 1983 Frankfurt Motorshow. Visually indebted to the outgoing 911 SC, it was available in Coupe, Targa and Cabriolet guises and wore a revised front valance complete with auxiliary driving lamps and a subtle 'Carrera' script on its engine lid. Estimated to be 80 percent new, the newcomer's 3164cc flat-six engine was credited with 231bhp and 209 lb ft of torque - sufficient output to slingshot the Porsche to 60 mph in 5.3 seconds and on to a top speed of 153mph. The brakes were enlarged, the top two gear ratios slightly raised, and a redesigned timing chain tensioner installed. By now all 911s were built with galvanised bodies, relieving the concern over corrosion.
Share: