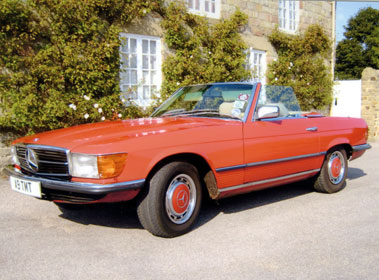 "If you are looking for a practical roadster with style, fine handling, comfort, reliability and high build quality, the Mercedes-Benz 380SL is the answer. For less than $15,000, nothing touches it in terms of an overall package". (Sports Car Market, August 2002)

Successor to the European 350SL and American 450SL models, the (R107) 380SL was introduced in March 1980. Utilising the same two-door monocoque bodyshell equipped with all-round coil-sprung independent suspension (wishbone front / semi-trailing arm rear), power assisted recirculating ball steering and four-wheel disc brakes as its predecessors, the newcomer boasted an enlarged 3839cc SOHC V8 engine and improved four-speed automatic transmission. Credited with some 204bhp and 232lbft of torque, European specification cars were reputedly capable of 0-60mph in 9.1 seconds and 127mph. A strong seller throughout its production run, the last 380SL was apparently despatched by the factory in October 1985.

Finished in red with beige upholstery, this particular example is described by the vendor as being in "very good" condition with regard to its engine, automatic transmission, electrical equipment, interior trim, bodywork and paintwork. Since entering the current ownership on 16th August 2004, 'A9 TMT' has reportedly had "both doors, all four wings and its bootlid replaced and resprayed" with much of the work being entrusted to John Bee of Sheffield (a £3,887.59 invoice of his dated 8th February 2008 accompanies the car). While, other cosmetic improvements are understood to have seen the 380SL receive attention to its brightwork (bumpers) and interior trim (driver's seat, brake console, rear seat centre section) not to mention a new hood (2004). Apparently able to boast "a full service history", the 2+2 seater has also benefited from a new radiator (2005) and various ignition system parts: HT leads, rotor arm, distributor cap (2008). Riding on correct type steel wheels and sporting a new JVC radio / CD player (2008), 'A9 TMT' is said to have provided an "enjoyable ownership experience". Ideal for enjoying the summer sun but capable of year round usage, this pampered Mercedes-Benz sportscar is offered for sale with MOT certificate valid until October 2009 and current road fund licence.
Share: