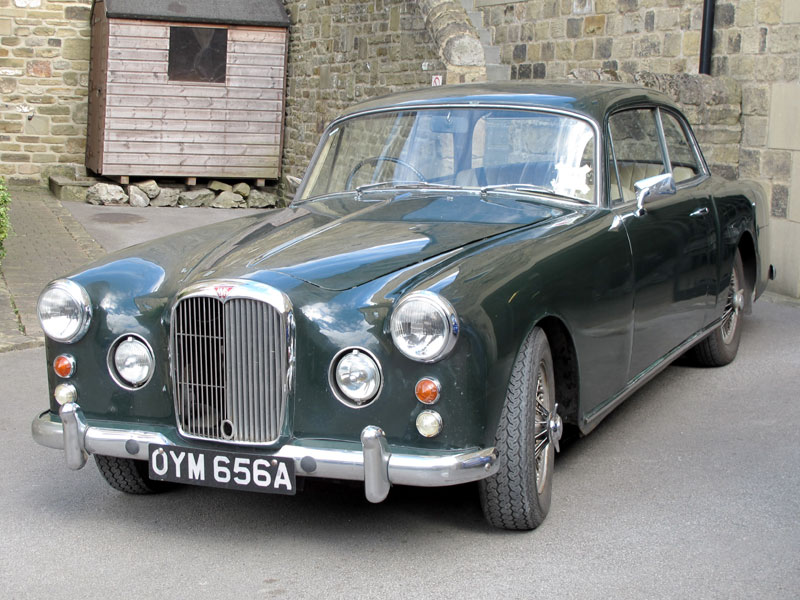 The Alvis TD21 was launched in late 1958 and owes its stylistic origins to a special-order Hermann Graber Coupe variant of the TC21/100. Suitably reinterpreted for production by Park Ward, the TD21's sleek two-door Saloon coachwork incorporated notably more interior and luggage space. Based around a rigid, cross-braced box section chassis equipped with independent coil and wishbone front suspension and leaf-sprung back axle, the new model was powered by a 2993cc OHV straight-six engine mated to a four-speed manual gearbox. The Alvis was available with the option of servo-assisted Lockheed front disc brakes from day one, while an improved 12-port cylinder head was phased in soon after full production commenced. The Series II versions of January 1962 brought four-wheel disc brakes, while a five-speed manual ZF gearbox was introduced in October of the same year. The previously stand-alone fog lamps now became an integral part of the front bodywork. A manual transmission TD21 tested by Motor magazine in 1960 completed the 0-60mph dash in 13.5 seconds and topped the magic 'ton' flat out. Total TD21 production over the model's five year reign was 1,070.

The fascinating, two-owner Series II TD21 on sale is a 1963 Saloon that sports Green Park Ward coachwork teamed with a Cream leather interior. It was acquired by the vendor some twenty years ago from a company director who had apparently used it to travel the length and breadth of the country on business. Between them they have racked up 300,000 miles. However, the vendor tells us that in trips to such far flung destinations as the North Cape of Norway and south of France, breakdown recovery has never been required and that the original engine - overhauled 25,000 miles ago - consumes barely a pint of oil and no water between services. He also notes that while the body panels still fit very well, the rear wings and sills would now benefit from attention. A venerable, seemingly unmolested TD21 thoroughly deserving of a caring new home.

PLEASE NOTE: This vehicle does not have an MOT.
Share: