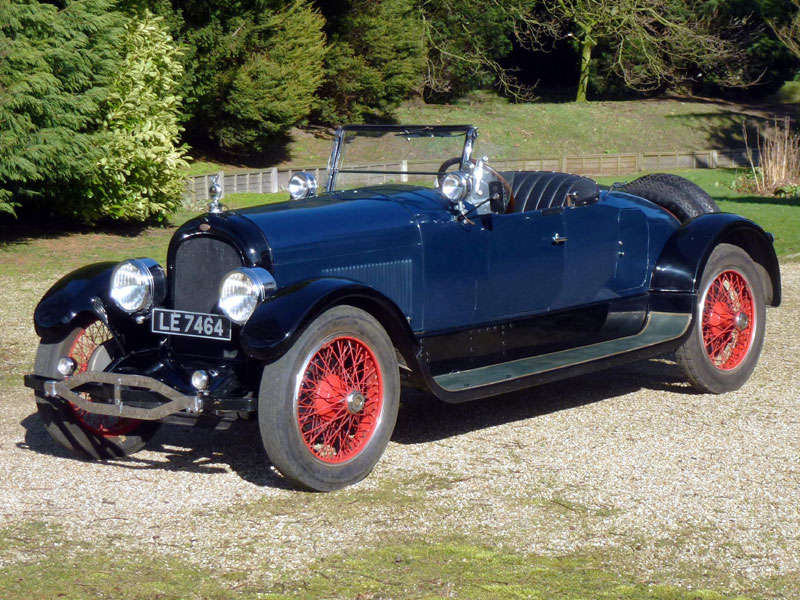 Considerably lighter / more agile than the equivalent Stutz, Packard or Cadillac, the Marmon Model 34B made extensive use of aluminium for its 5.5-litre straight-six OHV engine, gearbox casing, differential housing and bodywork etc. Chosen to provide the pace car for the 1920 Indianapolis 500, Marmon had an example of its newcomer clothed by the Hume Body Corp of New York as a rakish `bee tailed' Speedster. Entrusted to Barney Oldfield (who had secured Marmon's famous 1911 Indy victory), the resultant two-seater lapped the world famous oval at over 80mph before easing into the pits. A suitably smitten Oldfield then drove it coast-to-coast across America eight times (to promote a tyre range bearing his name), while Marmon became the first manufacturer to offer replicas of an Indianapolis 500 pace car by putting the Model 34B 2-Passenger Speedster into production.

One of just six survivors known to the Marmon Club (from the 170 1923 Model 34B 2-Passenger Speedsters made), chassis 2230091 was sold by C.E. Valentine Junior of Michigan to renowned UK collector Colin Crabbe in June 1973. Passing to garagiste Roy Middleton of Potters Bar the following year for £8,500, the Marmon was subsequently upgraded with front-wheel brakes (via the adoption of a modified 1928 Sunbeam 3-Litre front axle) before appearing in the TV series `Reilly, Ace of Spies' and `Jeeves and Wooster'. Relinquished by the Middleton family to an associate of the Minardi F1 team in 2001, `LE 7464' entered the current ownership that same year. Presenting as an older restoration, the two-seater is described by the vendor as being in `good overall' condition with regard to its engine, three-speed gearbox, electrical equipment, interior trim, bodywork and paintwork. Benefiting from new batteries, this ultra rare Marmon is offered for sale with green logbook, detachable tan hood (not illustrated), assorted Marmon literature and owner's manual.
Share: