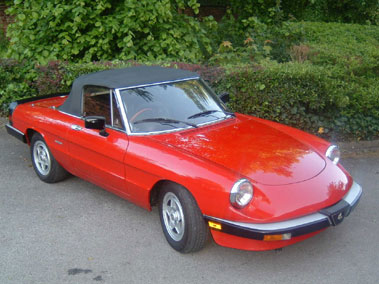 Introduced to the North American market in 1985, the facelifted 'Quadrifoglio Verde' (Green Cloverleaf) version of Alfa Romeo's long-lived Spider was visually distinguished by new front / rear spoilers, sideskirts and mirrors. Mechanically identical to its 'Spider Veloce' predecessor, the 'QV' was equipped with all-round coil-sprung suspension, precise steering and four-wheel disc brakes. Powered by a Bosch fuel-injected 1962cc DOHC engine allied to five-speed manual transmission, it boasted 120mph performance. Intended to appeal to a younger audience (hence the reference to the 1967 film starring Dustin Hoffman and Anne Bancroft), 'The Graduate' was a less luxurious but more affordable derivative of the 'QV'. Debuting at the same time, it benefited from cleaner, less fussy styling and a rawer feel that drew comparison with the original 'Duetto' Spider. Riding on steel wheels as standard, it remained in production until 1990.

Finished in red with black leather upholstery, this particular example is variously described by the vendor as being in "good" (electrical equipment, chassis, wheels / tyres) or "very good" (engine, manual gearbox, interior trim, bodywork, paintwork) condition. Reportedly "an American import that was professionally converted from left- to right-hand drive", 'E530 ERC' is believed but not warranted to have covered some 29,750 miles from new. Though, we are informed that it has "only been driven 6,500 miles in the last fifteen years". Said to have had "£1,750 spent recently on a new clutch, upgraded exhaust, electrics, Sony CD player, Alfa Romeo sports steering wheel, Alfa Romeo floor mats and a specialist service", the Spider further benefits from a corrosion deterring "sealed undercarriage". Riding on smart alloy wheels and boasting "a very good hood", 'E530 ERC' is summed-up by the seller as "a very stylish, head-turning Alfa Romeo" that would make "a great value way to enjoy convertible driving this summer". A rare sight on UK roads, this limited edition Spider is offered for sale with MOT certificate valid until August 17th 2007 and road tax valid until November 30th 2007.