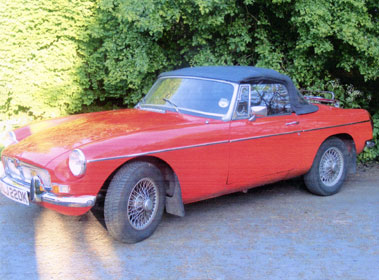 Replacement for the much-loved MGA, the MGB of 1962 took the concept a stage further by adding a degree of comfort and refinement to the good performance and handling characteristics which had made the MGA so popular. Unlike its predecessor which had a separate chassis, the MGB was of unitary construction and was powered by an enlarged, 1798cc version of the B-series engine, producing 95bhp and giving sprightly performance of 0-60mph in around 11.5 seconds and a top speed of over 100mph. Also featuring front disc brakes and luxuries such as wind-up windows (although a heater was still listed as an optional extra at £6), the MGB now came close to matching the comfort offered by its major market competitor the Sunbeam Alpine, while offering stronger performance and better handling.

Early development saw the introduction of a more robust five-bearing engine in September 1964 and a larger 12-gallon fuel tank in March 1965. The MGB was to go on to be one of the most successful sports cars ever with an 18-year production run and was particularly popular in the US market. Some 29 years after it ceased production, the MGB today enjoys a very strong following and has spawned a dedicated support industry making it among the most practical and cost effective of all classic cars.

This particular example, with the desirable overdrive transmission, began life as a UK-supplied MG B GT but has been reshelled using a rot-free Roadster body sourced in California, which was stripped on arrival before being repainted and converted to right-hand drive specification - a relatively simple job on the B. The engine is a reconditioned unit that is "barely run in", says the vendor, and it utilises electronic ignition, plus there is a brake servo. Unsurprisingly, the vendor describes this car as "very good" in respect of the body and paint and "good" in all other areas, except for the engine which is apparently "as new". Still registered with the DVLA as a B GT, this smart MG is offered for sale with fresh MOT certificate.