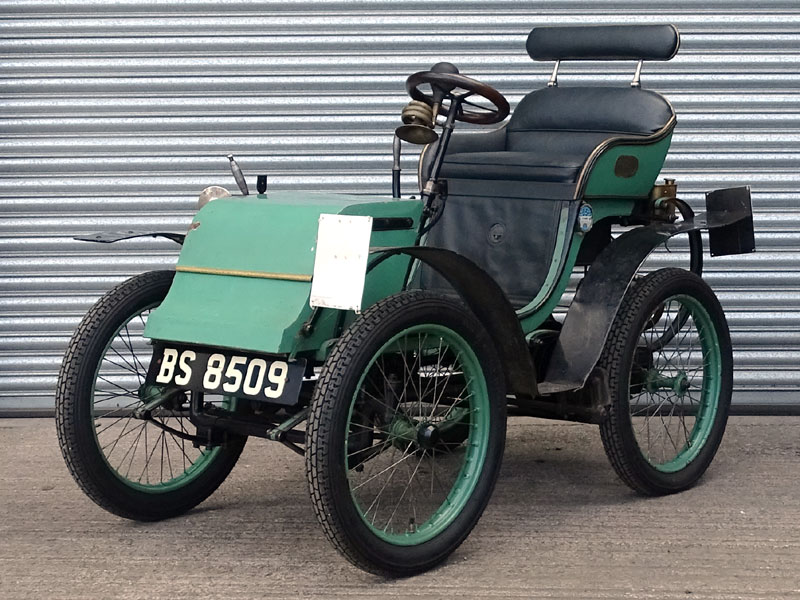 The marque took its name from Phoebus, the Greek sun God, and its vehicles were manufactured in the Parisian suburb of Suresnes between 1899 and 1903 by Noe Boyer et Cie. The company initially marketed Aster-engine tricycles, one of which was ridden at the impressive speed of 39mph on the Crystal Palace velodrome by Charles Jarrott. F W Wellington of St George's Square, London, marketed the four-wheel Automobilette Phebus when it came to the UK in 1998, which inspired the Automotor Journal of January 1900 to report 'the new Dion-engined Phebus takes Primrose and Haverstock Hills with the greatest of ease'.

This charming veteran formed part of the famous Ward Brothers' Collection until it was successfully auctioned in 2009. It is believed to be the only remaining example, and is distinctive for having a fold-open front seat enabling passengers to be carried ahead of the steering column - hence the name. The coachwork is presented in Green and Black livery and trimmed with Black leather - the Phebus motifs on the side panels are a feature of the car. Its equipment includes a multi-twist bulb horn and the engine has been fitted with a contemporary air-cooled cylinder head.

The veteran's comfortable ride is attributable to fully-elliptic front suspension and C-springs on the rear. Fresh valves and valve springs have been fitted in recent years and the Phebus has successfully contested the annual London-Brighton veteran car run. Its unexpected return to the market provides an exciting opportunity to purchase a unique London-Brighton contender that combines French 19th century chic with an impressive turn of speed and, of course, an early starting position in Hyde Park.
Share: