1965 Triumph TR4A
Previously the subject of a full photographic restoration 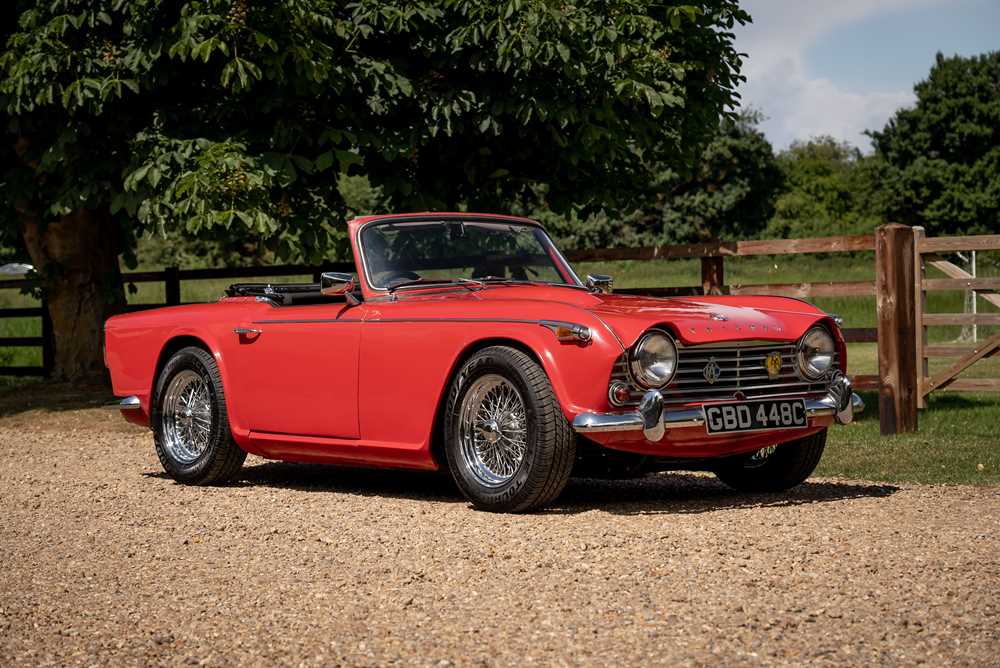 1965 Triumph TR4A
Previously the subject of a full photographic restoration

Codenamed 'Zest', the TR4 was introduced in 1961 as a replacement for the TR3A. Though it was based on the chassis and drivetrain of its much-loved predecessor it cut a far more modern dash, thanks to an all new Michelotti-styled body. Power was provided by Triumph's proven OHV four-cylinder engine. The capacity was, however, increased to 2,138cc. Other mechanical updates included a wider track front and rear, rack and pinion steering and an all-synchromesh gearbox. The optional overdrive was now made to operate on second and third gears as well as top - the result was effectively a close-ratio box with seven speeds. There was also the option of a unique hardtop with fixed glass rear window, integral rollbar and removable centre section. The final iteration of the TR4 was the TR4A, introduced in 1965. This embodied a number of small styling changes and upgrades to the specification but, more pertinently, some 75% of TR4As were equipped with independent rear suspension (IRS).

The right-hand drive TR4A on offer is one of these desirable IRS cars. Built in 1965 and originally finished in Old English White, the car was purchased new by a Miss Ruth Carolyne-Palmer of Rotherham and remained in her possession for some 35 years. Passing into the hands of vehicle restoration firm proprietor Michael Gillett in March of 2000, a complete body-off-chassis restoration was undertaken over a subsequent two year period. The entire process was fully documented with more than sixty photographs captured and included within the cars substantial history file. Colour-changed to Triumph’s iconic Signal Red, with the four-speed manual gearbox equipped. Riding on chrome wire wheels, this TR4A has covered less than 10,000 miles since the major overhaul. Our vendor describes the bodywork, engine, electrical equipment, paintwork and interior trim as “very good”, whilst the transmission is described as “average”. Remaining un-temperamental during our recent photography session, ‘GBD 448C’ is offered with full weather equipment, MOT certificates dating back to 2002, tax disks from 1977, a large quantity of invoices for new parts used during the restoration, photographs, workshop manuals and other sundry literature.