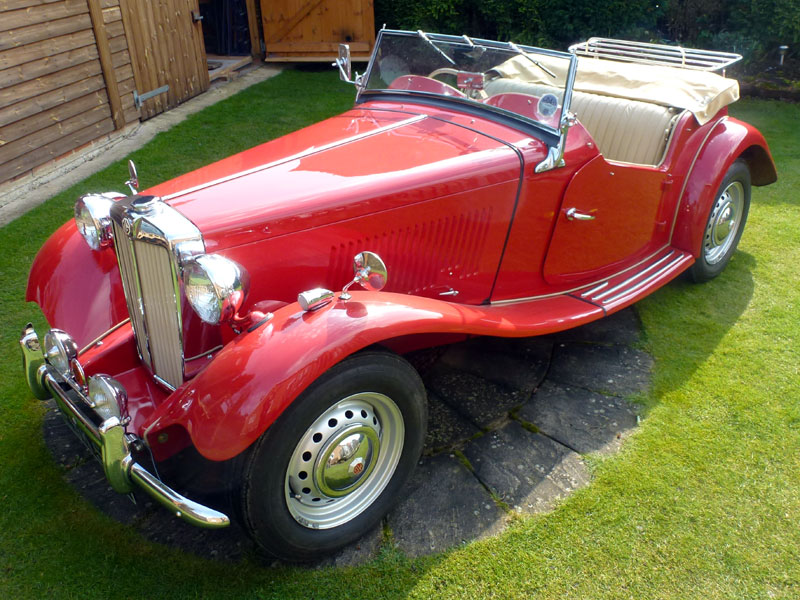 - Restored to award winning standards in 1991

The first post-war MG was the TC. It bore great similarity to the pre-war TB and was fitted with basically the same 1250cc OHV XPAG engine. It was superseded by the TD in 1950 which, though visually similar to the earlier cars, was built around a more modern chassis derived from the Y-Type Saloon. The benefits included independent coil-spring front suspension, rack and pinion steering, and smaller 15-inch disc wheels. The newcomer also boasted a hypoid bevel axle, hidden scuttle hoop and twin leading shoe front brakes, and was five inches wider than its predecessor.

A home market car, chassis TD26197 migrated to America during the late 1950s. Repatriated from Iowa some three decades later, the MG was reportedly treated to an extensive 'nut and bolt' restoration by a previous keeper. Completed in 1991 to 'award winning standards', the work appears to have lasted well. Finished in Red with Beige upholstery, the TD is described by the vendor as being in "excellent" condition with regard to its engine, gearbox, bodywork and paintwork with "very good" interior. Treated to a new crankshaft oil seal in 2010 and sporting a full complement of weather equipment, this matching chassis and engine numbers MG presents extremely well and is ready for Summer.

PLEASE NOTE: It is hoped the sidescreens for this vehicle will be delivered to the sale venue by 1pm on 20th April. If this is not possible, they will be available for collection from the vendor by the successful purchaser.
Share: