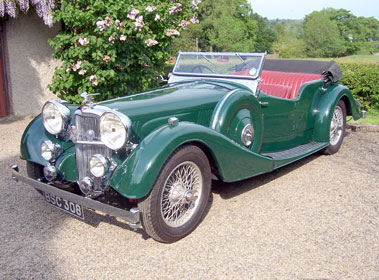 "In the Alvis Speed 25 the makers have produced a car which will delight those who appreciate fast motoring with an ample margin of safety. A very quick response to the accelerator is matched by exceptional steadiness under heavy braking conditions, light and accurate steering, and road holding of that special quality which is so rarely encountered these days" (Speed 25 SB Road Test, Motorsport 1936).

According to information kindly supplied by the vendor, this particular example is one of just thirty-nine Alvis Speed 25 chassis to have been clothed with four-door Tourer coachwork by Cross & Ellis. A handsome proposition that made the most of its 10ft 4in wheelbase (shared with the fabled 4.3 Litre Shorts Chassis cars), the design featured a fold-flat windscreen, elongated bonnet, single side-mounted spare wheel, neatly integrated boot and curvaceously full flowing wings. Despatched to dealer J.H. Galt Ltd of Glasgow on 20th November 1937, the Tourer is understood to have been part of a special four car order placed by the Edinburgh Police Force (hence its Scottish capital issued 'BSC 308' registration number). Originally liveried in black and lightly modified so as to accommodate the constabulary's radio equipment / batteries under its rear seat, the Speed 25 remained on active duty until 1946 by which time it had apparently covered over 145,000 miles. Paperwork on file includes two letters from a contemporary Edinburgh Police driver.

Shortly after entering the current family ownership in 1967, 'BSC 308' was stripped back to a bare chassis as part of an extensive 'body off' restoration that took some four years to complete. Found to still be carrying its factory-fitted engine not to mention one of the rare and desirable high ratio 3.8:1 differentials (the latter doubtless invaluable for high speed pursuits), the Alvis was treated to a thorough mechanical overhaul which also encompassed its "gearbox, back axle and brakes etc". Refinished in British Racing Green using traditional coach painting techniques and refitted with its original red leather upholstery, the Tourer has acquired a mellow patina over the last four decades; the vendor considering that only a localised area of bubbling on the boot lid and small tear to the side of the rear seat squab detract from its appearance. Accompanying MOT certificates date back to 1971 and confirm that circa 44,000 miles have been covered since work was completed, 'BSC 308' reputedly being "meticulously maintained both bodily and mechanically" all the while.

Stated to have had "light summer use only" and to have been "laid up correctly during winter", the Speed 25 is nevertheless said to be "well known in the Alvis Owners' Club" and to have "won many (sixty plus) awards including first place in various Concours competitions". Reportedly a veteran of "several television series such as 'All Creatures Great and Small' in which it was used by Granville Bennett one of the main characters", the four-seater sports discrete trafficators in addition to its original semaphore indicators. Riding on silver-painted wire wheels, this Post Vintage Thoroughbred is offered for sale with a copy delivery certificate, numerous restoration invoices, assorted old MOTs, various letters and current MOT certificate valid until November 2009.
Share: