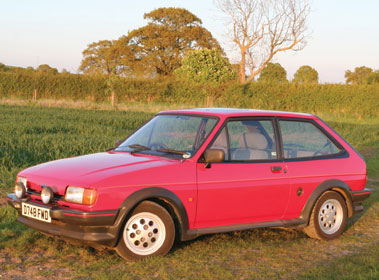 Ford cleverly exploited the mini-hot-hatch market in 1981 with the first XR2, pepperpot wheels, black arch extensions and racy graphics helping to disguise the Kent 1.6 engine and four-speed gearbox. Survivors already have a classic following. From 1984-89, the XR2 grew up, however, with the fitment of the 1.6 CVH engine and five-speed gearbox in a slightly larger, more practical bodyshell. Simple (it was still on a Weber carburettor) but effective, the new XR2 would reach 60mph in 9.5 seconds and top 110mph, and also transport five people in relatively relaxed comfort when required. Like the XR4i in the same collection, rust and boy racers have decimated survival rates and now it is extremely rare to see an XR2 in original, unspoiled condition.

This example survived thanks to its five caring owners. Its first two owners were ladies, covering just 40,000 miles in 10 years. Enthusiast owners followed, the car even being fitted with a new exchange engine by a Ford main dealer in 2001, when the source of a persistent oil leak could not be found. Later the same year, the car received its only (and easily reversible) departures from originality with the fitment of a Toad alarm system and a Clarion sound system with boot-mounted CD auto-changer, Jensen amplifier and large woofer box. Acquired by the vendor in 2005, the car has recently had extensive repairs to the underside to bring it up to the same high standard as the top surface. The replacement engine has now covered c30,000 miles and this represents a rare opportunity to acquire a modern classic that is very easy to maintain and in remarkably unspoiled condition.

PLEASE NOTE: This vehicle now has an MOT until June 2010.
Share: