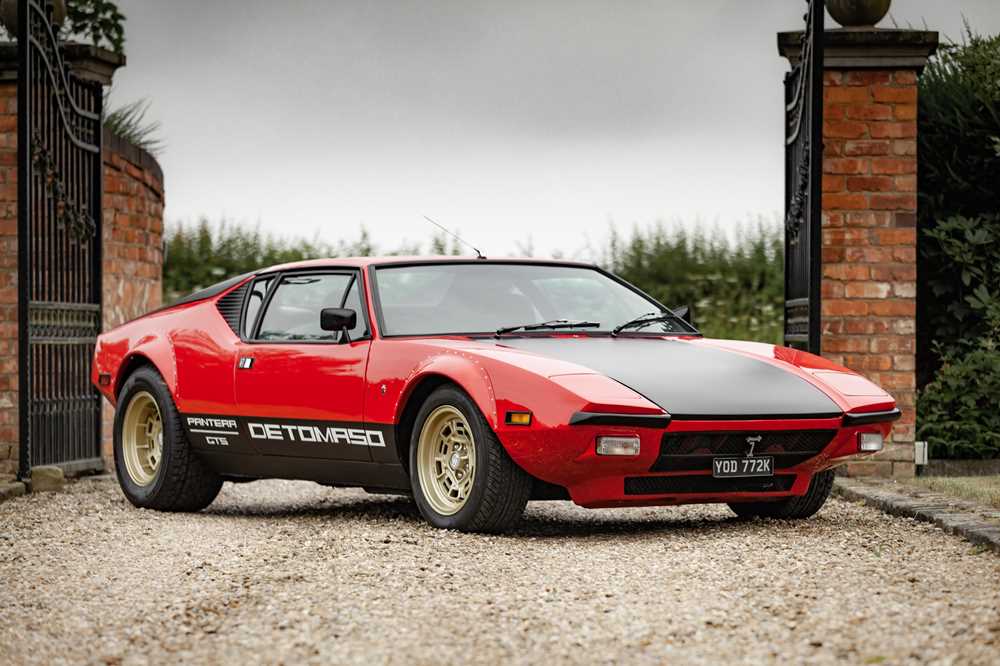 Having established himself as a serious automobile manufacturer with the Mangusta coupé, Alejandro De Tomaso commissioned Lamborghini designer Gianpaolo Dallara to produce the chassis for his new mid-engined supercar: the Pantera. Dallara opted for unitary construction for the steel chassis/body - abandoning the Mangusta's backbone frame - and adopted competition-specification double wishbone/coil-spring suspension all round. The Ford Motor Company was De Tomaso's partner at the time of the Pantera's introduction in 1971 and thus the Pantera, like the Mangusta, relied on Ford V8 power. Mated to a ZF all-synchro five-speed transaxle, the 351ci (5.8-litre) Cleveland engine varied in output depending on the destination market, and in European trim came with 330bhp on tap, enabling the Pantera to complete the 0-60mph (0-96km/h) sprint in a little over 5 seconds and touch 160mph (257km/h) flat out.

Styled by Tom Tjaarda at Carrozzeria Ghia, the stunning coupé body was in fact built by Carrozzeria Vignale, both companies being part of De Tomaso's empire in the early 1970s. De Tomaso's longstanding relationship with the Ford Motor Company led to an arrangement whereby the Pantera was distributed through select Lincoln-Mercury dealerships in the USA, where a lower compression, 248bhp Cleveland motor (meeting stricter emissions regulations) was introduced in 1972 on the Pantera 'L'. In 1973 the esteemed American motoring journal Road & Track named the Pantera its 'Sports Car of the Year'.

The 1974 energy crisis led to a parting of the ways between Ford and De Tomaso, who continued to sell the Pantera in Europe. At around the same time Ford ceased production of the 351ci Cleveland V8, which led to De Tomaso sourcing their engines from Ford Australia who continued to make that engine until 1982. The Australian-made engines were available in a range of power outputs up to around 355bhp.

Exceptionally long-lived for a supercar, the Pantera was still around in the 1990s having undergone a series of upgrades. The first of these had appeared on the 'L' model of 1972, which featured 'impact resistant' bumpers and improved cooling and air conditioning systems. Flared wheelarches distinguished the GTS model, which in European trim came with a 355bhp engine, larger wheels/tyres, and other performance enhancements.

This rare European Specification GTS was originally supplied by Achilli Motors in Milan, Italy. The car was later exported to the US and returned back to Europe (and then the UK) in 2013 when a major restoration commenced. Painted in the original GTS colours of red over satin black with the DeTomaso decals and gold wheels (front wheels are magnesium 8" by Campagnolo and rears are alloy 10" by Ronin Industries, Italy). All suspension components were stripped, cleaned, powder coated, re-bushed and then re-fitted, ball joints and drive shafts were also replaced. The gearbox was stripped, checked and then rebuilt with a new slightly lighter than original clutch supplied by Roland Jaekel which is reputedly 'good for 350 bhp'. The engine was stripped, cleaned checked and rebuilt replacing components where necessary. 'YOD 722K' is currently running on a 600 Holley carburettor with Pertronix electronic ignition and a more modern high torque starter motor. The interior has been re-trimmed and fitted with rake adjustable seats for comfort (original seats are available at no additional cost and can be collected from the vendor's Stockport home). Power steering by Scott Bell has been fitted which makes the car much lighter at slower speeds and the original rear brake calipers have been replaced by more modern Wilwood units (with a handbrake modification).

UK registered on a v5c document and offered with a comprehensive history file containing invoices from Italy, the US and the UK; the Pantera remains a favorite amongst many automotive enthusiasts. This restored and eye-catching GTS is a step back to a beautiful time in automotive design with a collaboration of American Muscle with Italian design.