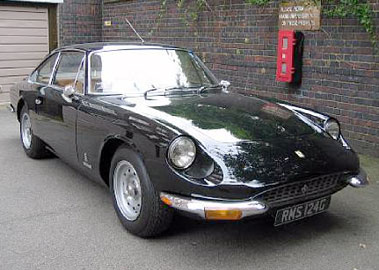 Unveiled at the October 1967 Paris Salon, the 365GT 2+2 was Ferrari's most luxurious model to date. Equipped with sumptuous Connolly leather upholstery, electric windows, air-conditioning, power steering and a handsome teak veneer dashboard as standard, it had a notably capacious boot. Built around a tubular steel chassis frame (designated Tipo 591), it shared the same wheelbase as its 330GT predecessor but benefited from the adoption of a wider track and - for the first time on a Maranello 2+2 - independent rear suspension. Consisting of double wishbones and coil springs, this assembly was tempered by oleopneumatic self-levelling struts that had been specially developed in conjunction with Koni. Intended to maintain equilibrium regardless of passenger or luggage load, they were praised by the contemporary motoring press for their contribution to the model's fine ride and handling. Powered by a 4390cc Colombo-derived V12 engine (designated Tipo 245) that developed 320bhp at 6600rpm and 268lb-ft of torque, the 365GT 2+2 was fitted with a well-regarded five-speed manual gearbox. Reputedly capable of 152mph and 0-60mph in 7.3 seconds, such performance was reined in by all-round ventilated disc brakes. Styled by Pininfarina, its elegant lines borrowed heavily from both the carrozeria's 500 Superfast and 330GTC Speciale designs, but with a longer wheelbase and different rear roofline and tail treatment. Fitted with Borrani alloys as standard, wire wheels from the same source remained an expensive option. Production ended in early 1971 after 801 365GT 2+2s had left the factory. Of these just 87 are thought to have been to right-hand drive specification with the UK market apparently accounting for a mere 52 deliveries.

Finished in black with tan leather upholstery, this particular example is described by the vendor as being in "very good" condition with regard to its engine, five-speed manual gearbox, electrical equipment, interior trim, bodywork and paintwork. A UK market car, chassis number 12089 was supplied via Maranello Concessionaires Ltd and first road registered on February 28th 1969. Believed but not warranted to have covered some 15,800 miles from new (a figure partially substantiated by old MOTs), the Ferrari is known to have passed through the hands of Lord Brockett and to have been sold by marque specialist Talacrest three times. The subject of extensive restoration work during the 1980s including a bare metal colour change, retrim and engine overhaul, more recent work has seen the 365GT 2+2 given another respray (2006). Riding on period Cromodora alloys this handsome and imposing 1960s V12 Ferrari is offered for sale with sundry paperwork and MOT certificate valid until November 2009.
Share: