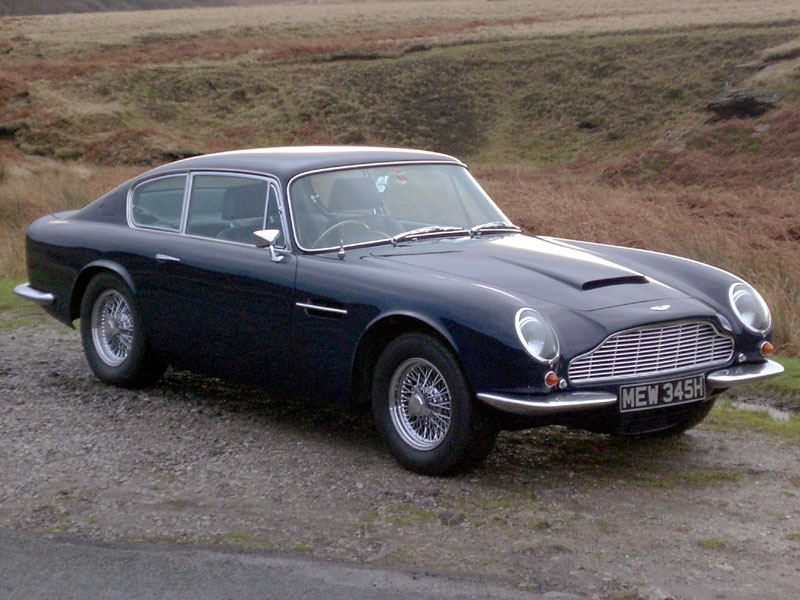 Entering production in July 1969 but not formally unveiled for another month, the rakishly elegant DB6 Mk2 was the ultimate evolution of the iconic Aston Martin DB4/DB5/DB6 line. Sharing the same sheet steel platform chassis as its immediate predecessor complete with all-round coil-sprung suspension (independent double wishbone front, trailing arm / beam axle rear), four-wheel disc brakes and Armstrong Select-a-ride adjustable rear shock absorbers, the newcomer nevertheless incorporated a host of detail improvements. Sharper and more responsive to drive thanks to wider wheels and fatter tyres (hence the need for its trademark flared wheelarches), the Mk2 also benefited from the provision of standard-fit power assisted rack and pinion steering. Automatic transmission remained a `no cost' option, while cars equipped with the five-speed ZF manual gearbox gained a lower first gear ratio and more positive Borg & Beck clutch. The fabulous Tadek Marek designed 3995cc DOHC straight-six engine could be had with a nascent form of electronic fuel injection. However, the majority of buyers wisely opted for carburettor-fed variants in standard (triple SU, 282bhp) or high-performance Vantage (triple Weber, 325bhp) tune. Indeed so troublesome did the AE Brico EFI system prove that several Mk2s were converted to Vantage specification by the factory. Revised seating both front and rear meant that the last of the classic DB-series family could also lay claim to being the most comfortable. Only in production until November 1970, just 239 DB6 Mk2 saloons are thought to have been made (of which a mere 122 were reputedly to triple SU carburettor-fed specification).

This particular example - chassis number DB6MK2/4116/R - was despatched new to the supplying dealer, Sundridge Park Motors Ltd of Bromley, on September 30th 1969. Issued with the number plate `MEW 345H' by Huntingdon County Council on November 6th 1969, its initial build specification included a Borg Warner three-speed automatic gearbox and seat belts for the front occupants. A photocopied continuation logbook extract on file (printed post 1971) lists just one registered keeper: James Jackson Esq. of Huntingdon. The same gentleman had a V5 registration document issued in his name during 1976 and exported the Aston Martin to the Isle of Man two years later where it was re-registered as `4 YMN'. Accompanying invoices indicate that the DB6 Mark 2 had returned to the mainland by 1991. Seemingly belonging to Dennis de Jersey-Lowery Esq. of Belgrave Square at the time, it was sold the following year by The Autodrome to Nicholas Farr Esq. of New Alyth, Perthshire. Mrs Farr became the Aston Martin's registered keeper during 2002 and in between times it was looked after by Classic Restorations (Scotland) Ltd; Mr Charles Palmer - the Scottish concern's managing director - being kind enough to furnish the vendor with copies of the relevant records.

Originally finished in Caribbean Pearl, the four-seater had its body colour changed to Dark Blue during the late 1990s, courtesy of Rainbow Restorations. As well as selling chassis DB6MK2/4116/R to the vendor in 2004 (at an indicated mileage of 69,715), that same year saw The Aston Workshop treat it to a full service, negative earth conversion, Kenlowe fan, Scorpion alarm, upgraded starter motor and hazard warning lights. Progressively improved and enhanced during the current ownership, the car benefited from the following during 2005: (a) original gearbox replaced with a more refined four-speed automatic unit by recognised specialist G Whitehouse, (b) new front / rear screens and stainless steel exhaust manifolds sourced from The Aston Workshop, (c) stainless steel exhaust system fitted by JP Exhaust and (d) the registration changed from `FFY 245H' to `MEW 345H' (the car's initial number plate).

During 2006 the four-seater gained four new MWS chrome tubeless wire wheels shod with fresh Avon CR622 tyres (the wheel/tyre combination being suggested by RS Williams) and had its engine enlarged to 4.2-litres and converted to run on unleaded fuel by Post Vintage. In 2007 the leather interior was refurbished to the original Blue (VM3282) by Leather Care Renovations and new underlay and Wilton carpets fitted by the vendor. A year later Post Vintage refurbished/replaced the instruments and the rear axle was treated to a limited slip differential of slightly lower 3.7:1 ratio by Eric Battelle. Over the last twenty-four months, Four Ashes Garage have thoroughly overhauled the engine and improved low end torque and power output (up to 290.1lbft @ 4,615rpm and 289.9bhp @ 5,620rpm respectively); upgraded the alternator, water pump, electronic ignition and engine mounts; refurbished the rear Selectaride dampers and fitted inertia reel seat belts all round. The exhaust manifold and system have been heat coated by Zercotec, the rear brake system completely replaced and the automatic gearbox treated to a reconditioned torque converter as part of a transmission service carried out by G Whitehouse.

The fruit of a lengthy search, this attractive DB6 is considered by the vendor to have "very good" engine, transmission, interior and wheels / tyres, "good" chassis and bodywork, and "good (with blemishes)" paintwork. It is being sold complete with a large history file containing (a) copy DVLA records dating back to the 1970s, (b) service and MOT details going back to 1991 and (c) numerous invoices / bills from Classic Restorations (Scotland) Ltd, The Aston Workshop, G Whitehouse, E Battelle, MWS, Post Vintage and Four Ashes, not to mention a tailored car cover and pair of spare overmats for the front footwells.
Share: