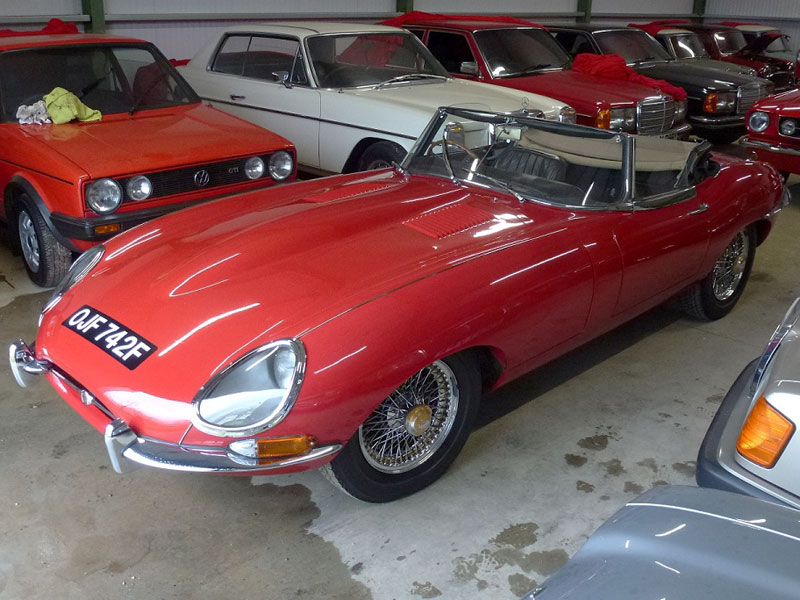 'OJF 742F' started life as a lefthand drive export model that was repatriated from the US in 1987. It is understood to have been restored in the 1990s, during which the chassis was converted to righthand drive and the engine from Stromberg to SU carburation. It has had four keepers since returning to these shores, the previous one of which acquired the Jaguar in 1991 and retained it before placing it in an Anglia Car Auctions sale in 2016, from which it was purchased by the vendor. Dry stored for most of his tenure, the E-Type still only displays a credible, though unwarranted, total mileage of 69,448 and he presently grades the 4.2-litre engine and manual five-speed gearbox as 'very good', the Roadster bodywork as 'good', and the Black leather trim and Red paintwork as average - the latter does display a degree of micro blistering in places.

1968 model year E-Types have been retrospectively dubbed Series 1.5 cars. The changes that distinguish them from the preceding Series 1 models were introduced to satisfy the increasingly safety oriented federal regulations and included: open rather than enclosed headlights; black plastic rocker switches for the dashboard as opposed to the toggle variety, black-painted ribbed cam covers, twin cooling fans, and adjustable seat backs. Just 2,801 Series 1.5 Roadsters were produced, of which the sale car is one, though it these days sports fared-in headlights.

The last E-Type rolled off the production line 43 years ago, yet the model still has a unique ability to excite enthusiasts of all generations, its Malcolm Sayer-penned lines thought by many, including none other than Enzo Ferrari, to be among the most striking ever to adorn a motor car. Though hardly rare (over 72,000 were built), they understandably remain the apple of many a collector's eye.
Share: