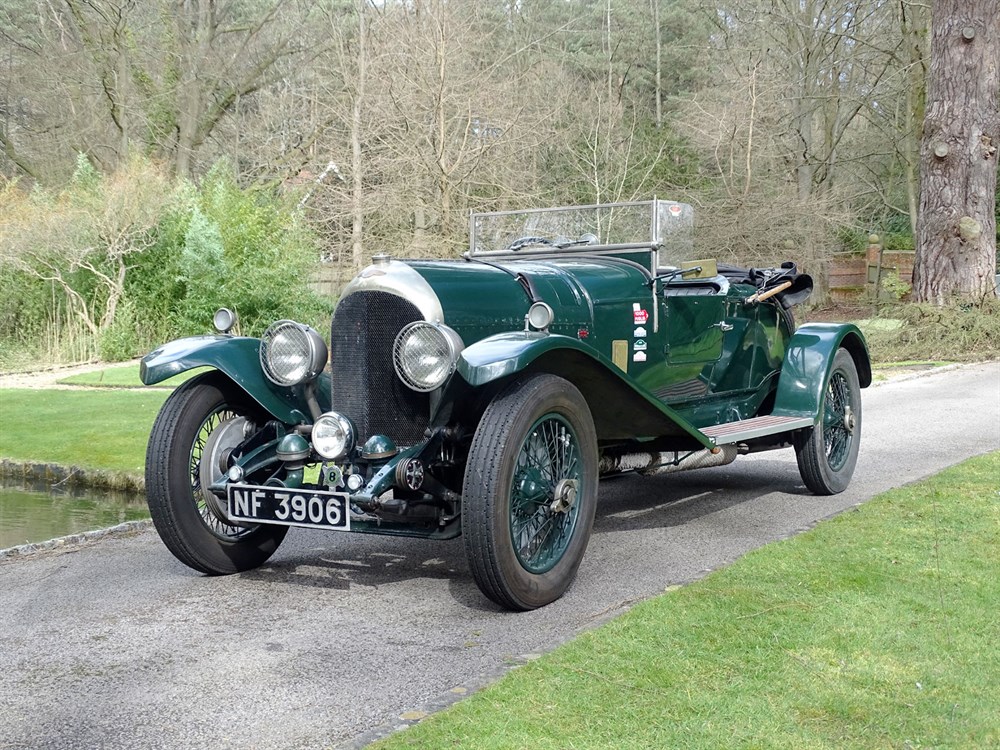 - Rebodied by Harrison in its current two-seater configuration during 1937

- Uprated to 4.5 litre power in 1986 whilst owned by former DEUVET chairman Peter Schack

Though initially opposed to the idea of competing at Le Mans, W O Bentley was well aware of how success in motorsport could increase sales, and, following the privateer 4th place of Canadian John Duff (co-driving with Bentley's test driver Frank Clement) in the inaugural 1923 Le Mans race, Bentley triumphed at La Sarthe in 1924, 1927, 1928, 1929 and 1930. The first two victories were achieved with versions of the 3-litre model - an extraordinary feat considering it was the first to be produced by a company that had only commenced production in 1921. By 1928, however, more power was needed, Bentley winning with the 4 ½-litre car 'Old Mother Gun', that had been trialled the previous year but eliminated in the infamous White House crash. Since then, upgrading the engine to 4 ½-litres (2/3rds of the company's 6 ½-litre unit), has been an accepted and proven way of improving the performance of the 3-litre model.

According to the copy chassis record notes, LT 1594 was originally dispatched from the Works to William Arnold coachbuilders of Chorlton-cum-Medlock, Manchester who fitted Weymann-style saloon coachwork. Based upon the 'Long Standard' 10 ft 10 in. chassis with 3-litre engine (LT 1593) and B-Type gearbox, 1594 was road registered NF 3906 and delivered in April 1927 to its first keeper - Percy Healey Esq., Chairman of rope and twine manufacturers Healey Brothers Ltd of Heywood, Lancashire. Healey Brothers had been founded by his grandfather in 1843 and the family was known as a generous contributor to local projects including schools, a library and swimming pool.

It is understood that in 1937 coachbuilders Harrison were commissioned to replace the saloon coachwork with a two-seater arrangement - a feature retained to this day. Various further works are recorded on the chassis record up to the outbreak of war in 1939. Presumably laid up for the duration of hostilities, the car was purchased for the princely sum of £50 around 1955 by Gerald Wild of Swinton, Lancs, who had discovered it in a very dilapidated state. Most proud of his purchase, Mr Wild set about returning the Bentley to the road and later recorded his adventures in an amusing article entitled 'Bentley on a Shoestring'. A copy is contained in the history file. He even reveals how one musical owner supposedly had the rear bodywork altered to accommodate a girlfriend's harp!

Mr Wild sold the car in 1957 for £100 (the country then being in the grip of the Suez Crisis) and an original buff logbook on file records four further owners in the Cheshire area. During the 1970s it was resident in Switzerland, before passing into the hands of Dr. Klaus Kading of Germany in 1979. Records and correspondence on file show the car being worked on in England during the 1980s by Donald Day. In November 1986, it was acquired by former DEUVET chairman Peter Schack. During his ownership the decision was taken to replace the 3-litre unit with that of a 4 ½ (DS 3556) whilst plans to have a VDP style replica body fitted were investigated but discontinued. During this period various works were also carried out by such renowned specialists as Dorset-based McKenzie Guppy Ltd and Tony Fabian of Blackmore Engineering. In 1997 the car changed hands again to another German owner, Hans-Albert Bense of Koln, before being purchased by the vendor via LMB Racing of Belgium in June 2002. In September that year he entered the Le Mans Classic and followed this with a number of events during his ownership including the 2002 Liege-Rome-Liege Rally, 2009 National Classic Tour and 2012 Zoute GP. The car is also a past entrant of the Mille Miglia retrospective.

Now described by the owner has having "very good" bodywork, engine and gearbox and "good" paintwork and interior, the car is accompanied by a large history file including aforementioned original buff logbook, photographs of previous works in progress, a notebook recording usage covering the period 1986 to 2004, a 3-litre Spares Booklet (1981 reprint), photocopied 3-litre brochure and Instruction Booklet, assorted invoices (dating back to the early 1980s) and a copy of Gerald Wild's entertaining article which includes period b/w images of the car. Resident in Belgium for the past 17 years, this sporting 3 / 4 ½ is ready to offer a new custodian exciting vintage motoring in the way only a pre-War Bentley can!
Share: