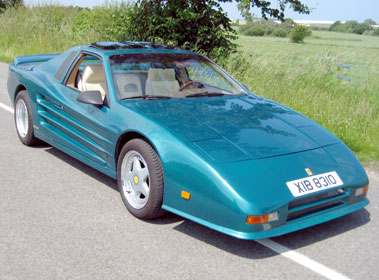 The car enthusiast is nothing if not creative. All over the world people are designing and building the machine of their dreams, be it something totally unique or the recreation of an existing model. For ordinary folk, the price tag of a new Ferrari is an automatic barrier to ownership, but to these automotive Rembrandts it represents a challenge to create a personalized copy. No marque stirs such desires more than Ferrari. Reviving a name from the company's past, Ferrari's mid-engined 12-cylinder Testarossa was built from 1984 to 1991 before metamorphosing into first the 512 TR and finally the 512 M. The flowing curves of its Pininfarina-penned coachwork make it look as though it's doing 100mph even when standing still and posters of it instantly adorned many a schoolboy's wall. However, only 10,000 or so examples were built before production finally ceased in 1996, leaving those whose thirst remained unquenched to seek their own solution.

Being mid-engined and readily purchasable secondhand at a reasonable price (some 370,168 were produced all told), Pontiac's Fiero has formed the basis of many a successful supercar evocation, not least Testarossa ones. The car featured independent suspension all-round and was initially powered by a four-cylinder engine of 2.5-litres. The option of a 140bhp 2.8-litre V6 unit was introduced in 1985. The Testarossa evocation on offer is based on a 1986 Pontiac Fiero powered by the 2.8-litre engine. It was reportedly built by a company called Lakeside Carriages Ltd and first registered in the UK in 1988. The LHD car is understood to come with "many receipts and a history file showing how it has been updated and improved over the years", especially by the present owner. For instance, it now boasts a sports exhaust system and Ferrari-style wheels that were custom made for it. The `Ferrari' is finished in a striking shade of metallic green and trimmed in magnolia hide. The owner describes the bodywork as "superb" and the interior as being "lovely". The car is also said to be "very good" mechanically. For those who like to cut a dash but can't run to the cost of a genuine Testarossa - this could just be the answer.
Share: