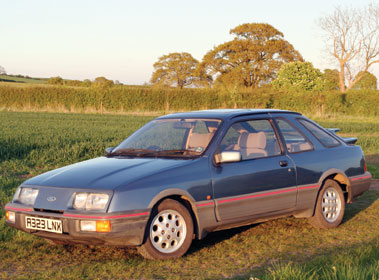 If there is an automotive icon of the early 1980s, it has to be the Ford Sierra XR4i with its biplane spoiler. When the Sierra saloon concept was first shown to the public in 1980, it had that spoiler, yet only the XR model used it in production and its production life was short: just 25,662 were sold in two years, 1983-85. Unsurprisingly it never suffered from the crosswind instability for which early Sierras were famed. Best known for its tail-happy handling - it was the last of the great rear-wheel drive V6 grunt Fords - the XR4i was loved by road testers for its mile-eating ability in comfort. Precious few of these icons survive in anything approaching original condition, rust and 'boy racers' having decimated survival levels.

It was the exceptional originality of this example that prompted the vendor to buy it. The car had one careful owner from new until 2002; acquired by the vendor in 2005 - largely because it now qualified for inexpensive classic car insurance - it remains completely original apart from the addition of a throaty Janspeed exhaust. Extras include the sunroof and (highly desirable) power steering. Since purchase the car has enjoyed considerable expenditure to bring the underside up to the same high standard as the upper bodywork. Since then it has proved totally reliable family transport, served as the recce car for the Liege-Brescia-Liege rally and completed the 2007 Norwich Union MSA Classic Run. A comprehensive history file is included, with all original handbooks etc, supporting the recorded mileage of just over 106,000 from new.