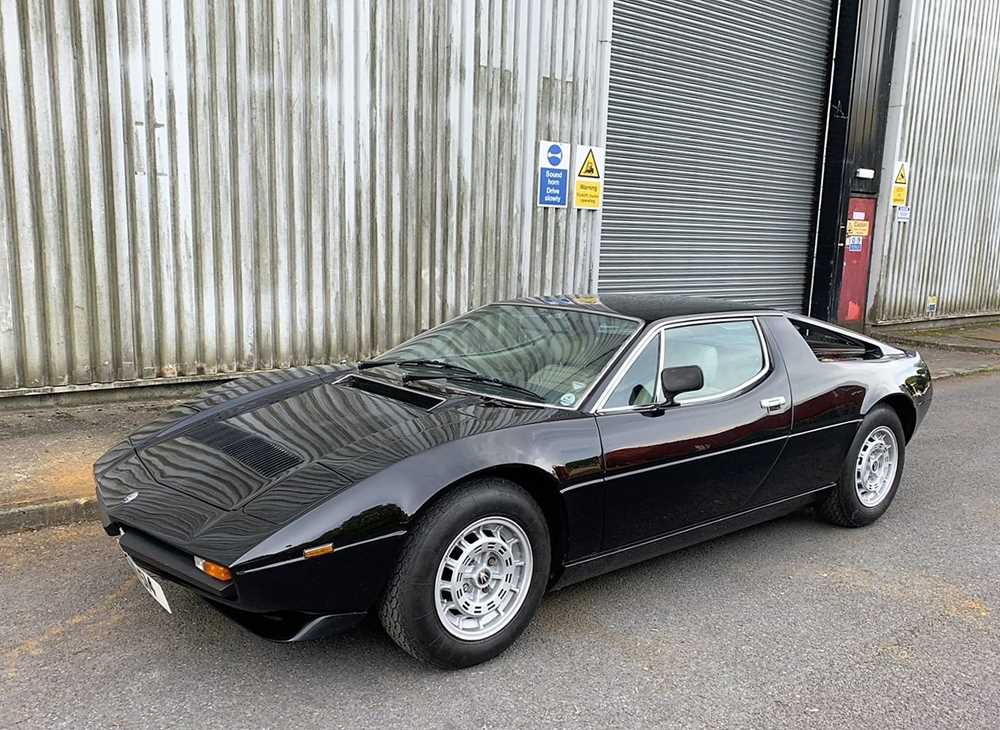 The vendor is confident that the paltry 21,300 miles shown by this rare right-hand drive, UK-supplied example’s odometer represents the total covered from new. His belief is supported, at least in part, by the modest mileage, the Merak SS has accrued over the past eighteen years (an average of 280 per annum). Finished in Black with Ivory leather upholstery, the 2+2-seater was despatched to renowned marque specialist McGrath Maserati during 2003 for a refaced flywheel, new clutch, reconditioned LHM pump, rear brake overhaul and replacement lower wishbone bushes etc. The same firm supplied some £3,147 worth of parts (new Omega 92.5mm pistons, bearings, valves/valve guides, gaskets etc) for a thorough engine overhaul carried out by Stanwood Engineering Ltd of Doncaster circa 500 miles ago. Further mechanical work followed in 2018 at an indicated 21,000 miles with the steering being refurbished, the front brake discs/pads replaced, two new front shock absorbers installed, the gearchange linkage bushes renewed, a fresh LHM tank added and four new tyres fitted. That same year also saw the bodywork undergo a partial restoration prior to being professionally repainted by Malton Coachworks. Returning to McGrath Maserati in April 2021, ‘MXI 514’ benefited from a minor service and replacement starter motor, while more recent fettling has encompassed a refurbishment of the triple Weber carburettors and rolling road tune. The interior is nicely patinated (though, there is a split in the driver’s seat base) and has had attention paid to its instruments and switchgear. Starting readily upon inspection and sounding purposeful thanks to its stainless steel exhaust, this striking mid-engined Maserati is worthy of close inspection. Offered for sale with V5C Registration Document, Maserati Club Driver’s Manual and history file.

Introduced at the October 1972 Paris Motor Show, the Maserati Merak (Tipo 122) was intended to rival the Ferrari Dino 246 and Lamborghini Urraco. Named after a star from the Ursa Major constellation, the compact 2+2 sportscar's styling deliberately aped that of its Bora supercar sibling (both models being penned by Giorgetto Giugiaro). Based around a steel monocoque chassis equipped with all-round independent double-wishbone suspension, four-wheel ventilated disc brakes and rack and pinion steering, the Merak was powered by a longitudinally-mounted 'quad-cam' 2965cc V6 allied to a five-speed transaxle gearbox. Fed by triple Weber carburettors, the engine was credited with 190bhp and 188lbft of torque. Debuting at the 1975 Geneva Salon, the uprated SS variant not only boasted more power and torque (up to 217bhp/199lbft) but also a lower kerb weight. As such, the ‘Super Sport’ was reputedly capable of 0-60mph in 7.5 seconds and 155mph. Praised by the contemporary motoring press with Motor magazine observing that: 'Performance and handling are the raison d'être of a mid-engined sports car, and the Merak's astounding cornering power is a match for its straight-line punch,' the diminutive Maserati remained on the market until 1983 by which time some 1,817 examples had been made (including 970 SS variants).