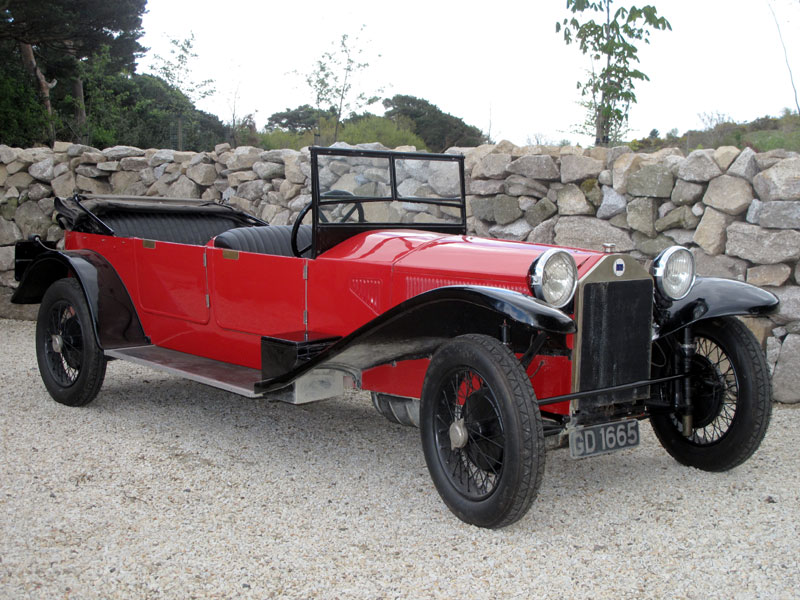 
Lot details
Registration No: Un-Reg
Chassis No: 14293
Mot Expiry: None

Introduced at the 1922 Paris Salon, the Lancia Lambda was an exceptionally advanced design. Supposedly inspired by contemporary ship-building practice, its highly innovative monocoque (or chassis-less) bodyshell was reinforced via a substantial transmission tunnel and integral seatback bulkheads. While other noteworthy features included independent 'sliding pillar' front suspension (complete with hydraulic shock absorbers) and four-wheel drum brakes. Powered by a series of compact V4 SOHC engines (2120cc 49hp, 2370cc 59hp and 2568cc 69hp) allied to manual transmission, even the earliest Lambdas were reckoned to be good for 70mph. Although not marketed as a sports car, the model's excellent roadholding saw a modified version finish 4th overall on the inaugural 1927 Mille Miglia (a class-winning performance which was repeated the following year). Evolving through Nine Series, the Lambda remained in production until 1931 by which time some 13,000 had been made - though, survivors are increasingly scarce.

An accompanying document prepared by a previous custodian states that assembly work on this particular example - chassis number 14293 - began in October 1925. A sixth series car, the Tourer apparently had its engine tested on November 2nd 1925 before being painted some ten days later. Shipped to the UK thereafter, it was road registered by the Glaswegian authorities on 25th February 1926 (or so the expired 'GD 1665' number plates adorning it would imply). Believed to have had four keepers between 1931 and 1938, little is known of the Lancia's subsequent history until the mid 1950s when a marque enthusiast discovered it in Cornwall. Interestingly, it was wearing desert camouflage paint at the time and thus might possibly have been one of the Lambdas that were seconded to the North African campaign of World War Two.

Reputed to have belonged to Reg Hawkins for around twenty years and to have been extensively restored but little used during that period, the Lancia's next long-term keeper was the York Motor Museum of Western Australia. Acquired in November 1980, chassis 14293 spent much of the next three decades on display. Retrieved from Down Under upon entering the current ownership, the Tourer has since undergone some gentle recommissioning. Finished in red over black with black upholstery, the Lambda is described by the vendor as being in "very good" condition with regard to its 2.1 litre engine, four-speed manual gearbox, interior trim, bodywork and paintwork (while, he rates the electrical equipment as "good"). Part of a small private collection, the car has yet to be reregistered for road use. Though, we are assured that it has been properly imported into the European Union with all relevant duties paid.

Sporting a correct type three-piece windscreen, boot-mounted spare wheel, black-painted wire wheels and Carl Zeiss headlamps, chassis 14293 presents as an older, but cared for, restoration. Arguably one of the twentieth century's greatest and most influential automotive designs, the Lancia Lambda is justly revered by enthusiasts and collectors alike.
Share: