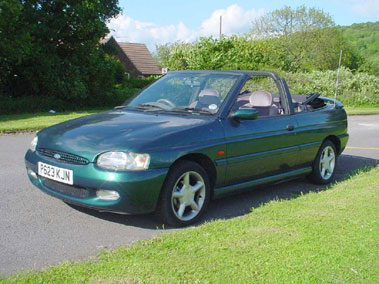 The final incarnation of Ford's beloved Escort, the so-called MK6 was introduced in January 1995. Visually distinguished by its revised bonnet, headlamps, front wings, bumpers and door handles, the newcomer boasted significantly improved ride and handling capabilities. While internally it benefited from a new dashboard design and the use of higher quality materials. Engineered by Karmann, the elegant Cabriolets remained among the most sought after versions. Launched in spring 1996, the 1.6i Ghia Cabriolet Auto utilised a 1597cc four-cylinder engine that combined peppy performance with decent economy.

Finished in metallic spruce with two-tone beige and tan upholstery, this particular example is described by the vendor as being "a superb summer motor car" that is "absolutely effortless to drive". Reportedly "lady owned", 'P623 KJN' boasts a generous specification including: "electric hood / driver's seat / windows, automatic transmission, power steering, air-conditioning, full tonneau cover and a hood bag". Said to have covered just 52,000 miles from new, it rides on five-spoke alloy wheels. Ready to be driven away from today's sale, this smart Escort is offered for sale with MOT certificate valid until March 2008.

PLEASE NOTE: THE ELECTRIC HOOD ON THIS LOT IS 'LAZY' IN OPERATION AND REQUIRES MANUAL ASSISTANCE.
Share: