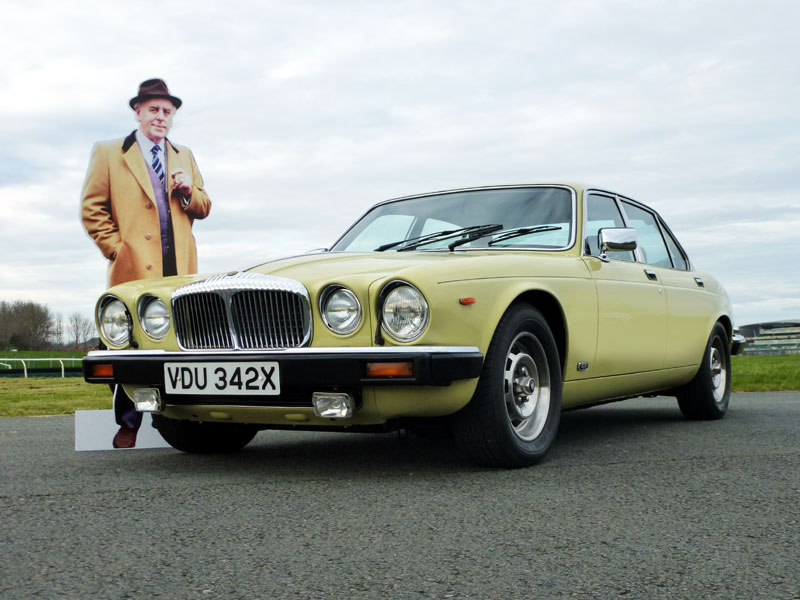 - The car George Cole wanted to buy himself, and came close to doing so before it was given away in a TV Times competition

- Used in series 4,5,6 and the Christmas Special 'Minder on the Orient Express'

- Recent mechanical overhaul to the brakes, suspension, bushes, ball joints, and servicing at the cost of £4,000

- Recent bodywork restoration with glass out repaint in its original livery of Portland Beige, interior refresh and new steering rack at the cost of £4,500

This lovely-looking 4.2-litre-engined Series III Daimler Sovereign will be immediately familiar to the many fans of the '80s comedy-drama TV series Minder, and would no doubt nowadays be referred by its star, the roguish car dealer and entrepreneur Arthur Daley, as 'a nice little earner'.

The Daimler's accompanying Heritage Certificate confirms that 'VDU 343X' (it carried the fake registration 'DYO 979V' for the camera) was manufactured on July 7, 1981 and finished in its still current livery of Portland Beige and Burnt Umber interior trim. First registered to Jaguar Cars, it was assigned to Euston Films and featured prominently as Daley's 'wheels' in Series 4, 5 and 6 of their massively popular show, as well as the Christmas specials 'Minder Around The Corner and 'Minder On The Orient Express'.

Daley was brilliantly played by the late George Cole, who reputedly became so enamoured of the Daimler that he attempted to purchase it from Jaguar Cars for his own use, and was on the point of doing so when it was decided to offer the car as a prize in a TV Times competition - a copy of the magazine cover with Cole enticingly dangling the vehicle's original keys is included in its history file.

The final iteration of the XJ6/XJ12/Sovereign range was the Series III model introduced in 1979. It was based on what had been the long wheelbase version of the earlier cars which was then treated to a subtle makeover by Pininfarina, providing what was now an 11-year-old design with a more contemporary look. The resulting changes included an increased glass area, narrower door frames, slimmer radiator grille, and more substantial rubber-faced bumpers. There were three engine options - the ubiquitous straight-six XK unit in either 3.4 or 4.2-litre guise and the V12 one of 5.3-litres. Though production of the V12-engined cars continued until 1992, that of the six-cylinder ones was phased out following the launch of their long overdue replacement, the XJ40 range, in 1986. Of the 318,000 XJ6, XJ12 and Sovereigns built, no less than 132,952 were Series III models.

This Daimler's vendor has recently invested heavily in his historic car. For example, £4,500 was spent with Miles Classic of Huddersfield on bodywork restoration that included a glass out repaint in the original colour and a refresh of the interior, while a further £4,000 was paid to marque specialist XJK of Newcastle-under-Lyme for attention to the brakes and suspension etc - during all of which such major items as the automatic gearbox and steering rack were replaced. Perhaps unsurprisingly the vendor now grades the bodywork, paintwork, interior trim, straight-six engine and transmission as all being in 'excellent' order, and is offering this truly unique Sovereign complete with extensive service history and service book, original handbooks and tool kit, and an advisory-free MOT valid into March next year. The odometer currently displays a total of 43,990 miles.

The inclusion of 'VDU 342X' in this auction not only represents an increasingly rare opportunity for Jaguar/Daimler aficionados to acquire a fine example of one of the marque's most iconic models (maybe as a present for 'er indoors'?), but for Minder fans to invest in not just one but both star cars from the show, as the Ford Capri equally famously driven by Daley's boxer turned bodyguard, Terry McCann (played by Dennis Waterman), is also on offer. As Arthur would almost certainly have said: "Buy the pair and from now on the world is your lobster."
Share: