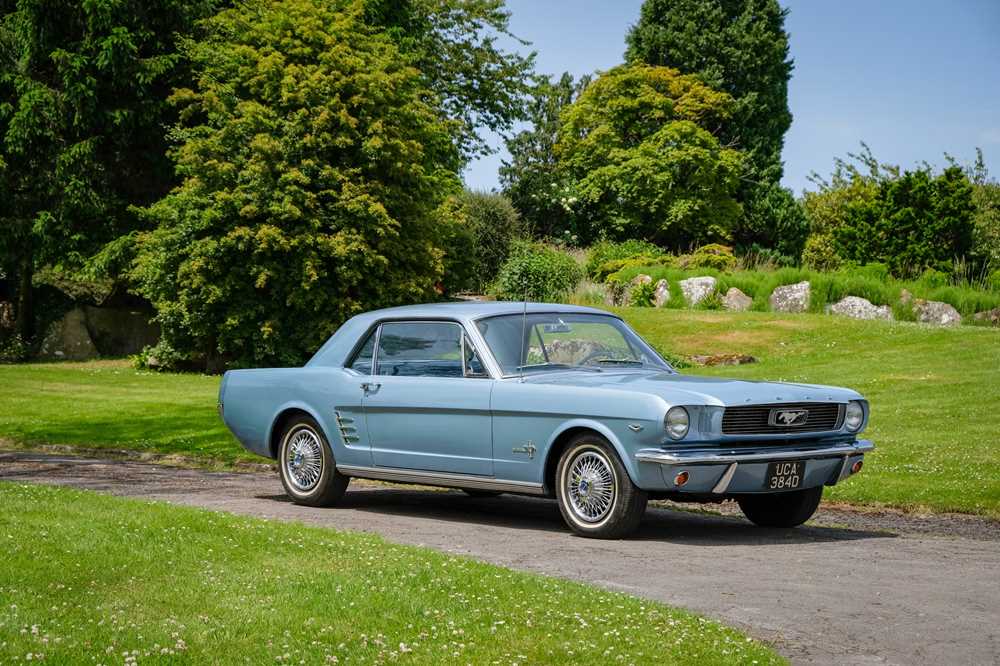 In continuous production since 1964, the Mustang is currently the longest-produced Ford car nameplate. Currently in its sixth generation, it is the fifth-best selling Ford car nameplate. The namesake of the "pony car" automobile segment, the Mustang was developed as a highly styled line of sporty coupes and convertibles derived from existing model lines, initially distinguished by "long hood, short deck" proportions.

Originally predicted to sell 100,000 vehicles yearly, the 1965 Mustang became the most successful vehicle launch since the 1927 Model A. Introduced on April 17, 1964 over 400,000 units were sold in its first year; the one-millionth Mustang was sold within two years of its launch.

Purchased by an elderly lady on 14th July 1966, this particular Mustang was featured the 289 cu small block V8 engine and was presented in the attractive combination of Silver Blue with matching two-tone blue interior and featured options including power steering, air conditioning, front and rear seat belts and wire wheel covers. Her pride and joy, the first owner insisted her car be looked after by main dealers only, until her sad passing in 1969 whereupon her husband then stored the car until 1975.

Early service records in the comprehensive history file confirm these events, with the owner’s manual and warranty card still present. The next owner, an MCCA judge, kept ‘UCA 348D’ in a purpose-built climate controlled storage facility until 2004 with the car only emerging briefly for shows and Concours events. At this point, it was sold to its next keeper, also an American Mustang enthusiast, who enjoyed the car up until 2015 covering just a further few thousand miles.

When this cossetted Mustang arrived in the UK in 2015, it had covered just over 14,000 miles. Today, the odometer indicates just 733 more. Accompanied with its last california plates, 'UCA 348D' comes accompanied with a history file including MOT certificates every year since its import to the UK, a collection of original paperwork including the owner’s handbook, a number of previous invoices, letters from the original owners, a Haynes repair manual, new workshop manual, Scott Drake catalogue and 2 sets of keys, this surely presents a rare opportunity.

Please note: This vehicle is a C code car and not the GT stated in the printed catalogue