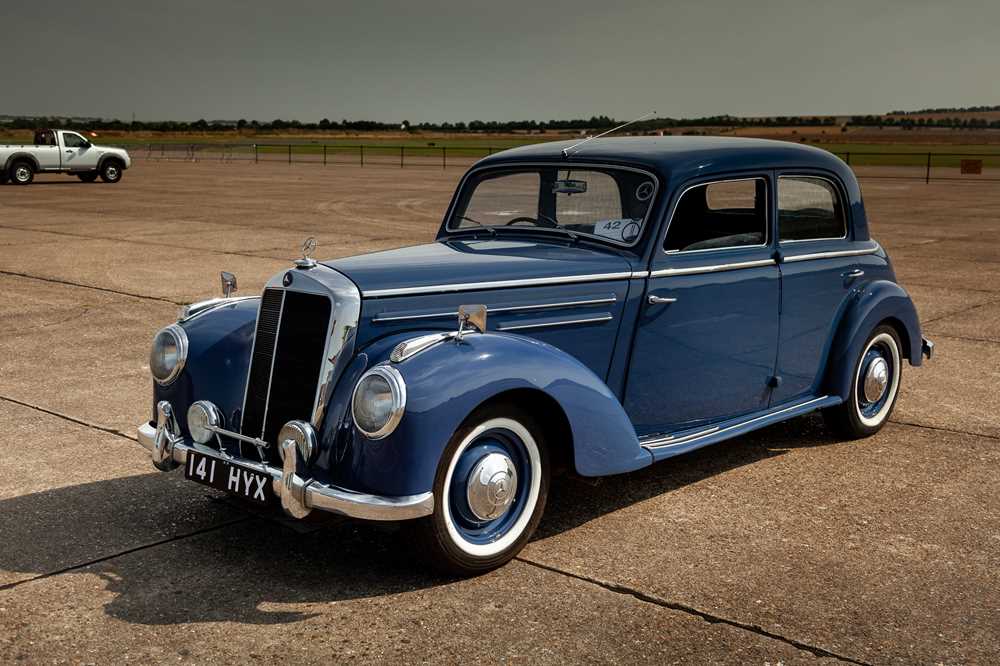 Rare to find in the right-hand-drive specification, this 220 was originally supplied by Murkett Brothers of Cambridge to its first owner, Albert Harris Ltd of Medusa Mills, Stourbridge, in March 1954. An original invoice dated 9th March 1955 for the supply of spare 6V bulbs addressed to the company survives in the history file along with the original buff logbook. The car was kept until 1965 when it passed to a Peter Kidner of Oundle, Northants. After this, the ownership trail peters out but by 2003 it was known to be resident in Castleford, West Yorks. The owner sold it to classic car dealer D T Mathewson of Thornton Le Dale from whom it was acquired by Brian Pilkington in 2008. By this time, the car had been treated to a body restoration in 2001-2002 as evidenced by two accompanying photograph albums and in March 2011 it was featured in an issue of the Mercedes-Benz Owners’ Club magazine. This referred to its ‘exceptional condition’ and mentioned its various awards at local car events. Much work was also carried out on the engine in 2005 with parts sourced from Niemoller in Germany. Between 2009 and 2012 further mechanical works were undertaken including skimming the cylinder head, replacing the valves and head gasket, fitting new auto-lube pipes and unions, new timing chain and installation of a Weber DGAV carburetor in place of the old Solex which resulted in the car running smoothly. The interior was also retrimmed with new seat covers and carpets. It is estimated that some £7,000 was spent during this period. The car was subsequently sold at the Bonhams auction in Harrogate in November 2012 and acquired by an engineer who again stripped the engine to resolve a rough running problem and maintained the car to a high standard during his ownership before it was acquired by the vendor in 2014. Finished in Blue with a Blue leather interior it is now described as being in ‘very good overall condition and comes with a detailed history file, numerous invoices and old MoTs, copy parts manual and Swansea V5C.

In essence a six-cylinder version of the 170S model, the 220 retained the chassis and rear suspension of the 170S but with modern double wishbone and coil springs at the front together with servo-assisted hydraulic brakes. Its SOHC 2.2-liter engine produced some 80bhp allied to an all-synchromesh four-speed column change gearbox. Replaced by the Ponton after just three years of production, this is a rare survivor and even more so in UK-supplied righthand-drive configuration.