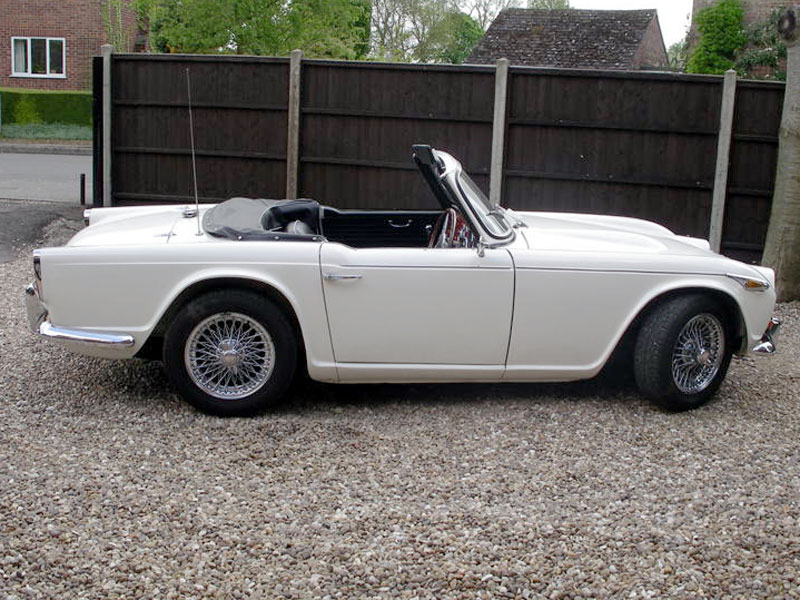 Codenamed 'Zest', the TR4 was introduced in 1961 as a replacement for the TR3A. Though it was based on the chassis and drivetrain of its much-loved predecessor it cut a far more modern dash, thanks to an all new Michelotti-styled body. Power was provided by Triumph's proven OHV four-cylinder engine. The capacity was, however, increased to 2,138cc. Other mechanical updates included a wider track front and rear, rack and pinion steering and an all-synchromesh gearbox. The optional overdrive was now made to operate on second and third gears as well as top - the result was effectively a close-ratio box with seven speeds. There was also the option of a unique hardtop with fixed glass rear window, integral rollbar and removable centre section. The final iteration of the TR4 was the TR4A, introduced in 1965. This embodied a number of small styling changes and upgrades to the specification but, more pertinently, some 75% of TR4As were equipped with independent rear suspension (IRS).

The right-hand drive TR4A on offer is one of the desirable IRS cars. Built in 1966, it is finished in Old English white and trimmed in black leather with white piping. Its four-speed manual gearbox is equipped with the optional overdrive system. In 1999, after a reputed 60,000 miles: the engine was overhauled with fast road cam, raising output to 119bhp; the chassis rejigged and painted; new inner and outer sills, door skins, floor pans, boot floor, boot boxes, inner rear wings, rear light boxes, rear deck and valance and front wings fitted; new steering rack, front and rear springs, front and rear dampers (Koni conversion on rear) added; all suspension bushes and wheel bearing replaced; new bumpers, over-riders chrome wire wheels and Pirelli tyres fitted. The wiring was also renewed and a Kenlowe fan added. The history suggests this very tidy TR4A IRS has covered only 13,285 miles since then, is in excellent order and both taxed and MOT'd. Such TR4s are increasingly hard to find.
Share: