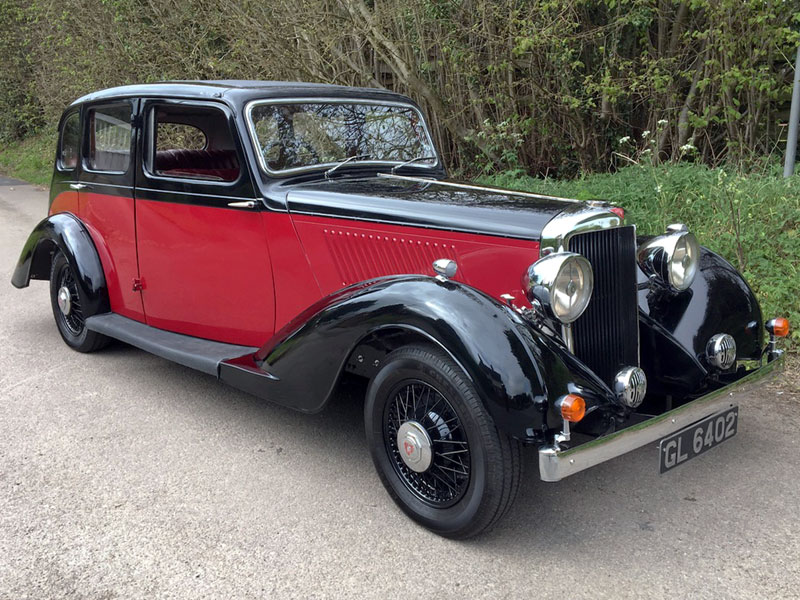 Introduced in August 1937, the Silver Crest was underpinned by a notably stiff ladder frame chassis featuring no fewer than six crossmembers. Like its illustrious Speed 25 and 4.3 Litre siblings, the newcomer boasted an all-synchromesh four-speed manual gearbox, independent front suspension and large diameter drum brakes. Available with a choice of saloon or drophead coupe coachwork, the newcomer could also be had with 16.95hp (2362cc) or 20hp (2762cc) straight-six OHV engines. Developing some 95bhp @ 4,000rpm and plentiful torque, the larger engined models were good for over 80mph. Popular among special builders because of their robust and tuneable running gear, fewer than twenty of the 344 Silver Crests made are thought to have survived to the present day.

This excellent Silver Crest Six-Light Saloon was first supplied to Wellsway Garage of Bath on 12th November 1938 and pleasingly retains its original registration number. We are advised that the car was in restoration for well over ten years. The previous owner purchased the Alvis in 2014 with all the mechanical work done including an engine overhaul but with the bodywork, paint, trim and chrome still left to complete. The paintwork was done professionally from bare metal. The wire wheels have been refurbished and look very smart. The leather is partly original / partly replaced and nicely done. The woodwork and chrome have been restored. There are a few photos of the refurbishment on file and a selection of invoices. There is an old V5 registration document along with the modern type. The car's original build record is on file. The body is by Holbrook as were all the Silver Crest saloons.
Share: