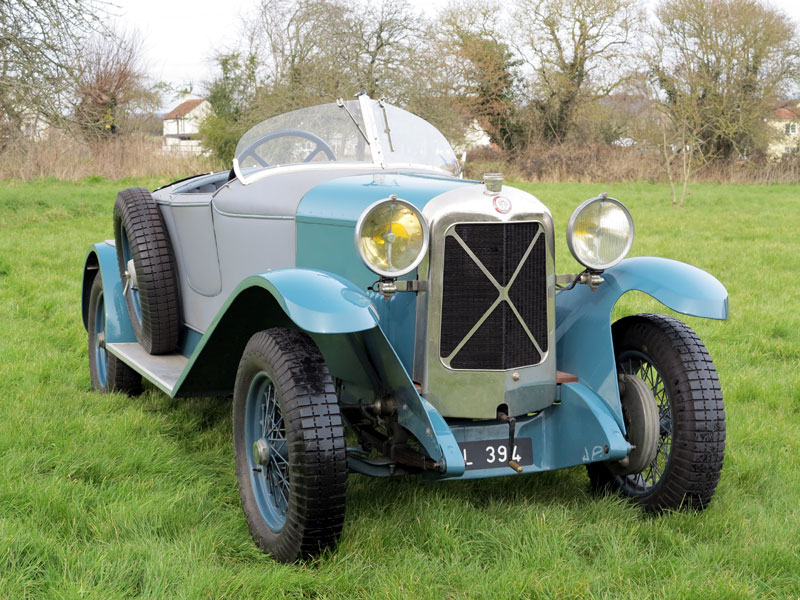 - Sympathetically restored including a thorough mechanical overhaul, new fabric body covering (over some of the original wood frame) and re-wiring etc

Hailed by some as the Bugatti of the cyclecar world, Salmson won an incredible 550 races and set ten speed records from 1921-1928 (at events such as the Bol d'Or, Le Mans 24 hours, Targa Florio, Spa 24 hours and Brooklands 6 hours etc). A renowned aero engine manufacturer, the French company developed its first twin overhead camshaft motorcar powerplant in time to win the Third Grand Prix de l'U.M.F. Cyclecars at Le Mans on September 17th 1921. Introduced the following year, the Salmson D-Type was the very first series production Touring car to be offered to the public with a 'twin-cam' engine. A landmark in motoring history, the newcomer could be had with a choice of two open and two closed bodystyles (though, the majority of buyers opted for the Open Four-Seater Tourer). Interestingly, Dirk Bogarde's father had a very attractive D-Type Saloon which he drove at Brooklands during the summer of 1926 (Ref: p.7 'Great Meadow An Evocation' by Dirk Bogarde, 1992).

The only D-Type 'Grand Sport' Torpedo Tourer known to have survived, chassis 25855 was ordered by the UK concessionaire SMS London on October 4th 1924 (though, delivery would not be made for another eight months). Issued with the London registration number 'YL 394' on September 5th 1925 when purchased from Gordon Watney & Co Ltd by Mrs C.W. Escott, the Salmson would spend the majority of its life in her family's care. Kept on the road throughout World War Two albeit with painted-out brightwork, the D-Type was subsequently laid-up during the 1950s. Pleasingly retaining its original twin-cam engine and rare four-speed manual gearbox, chassis 25855 finally left the Escott family's ownership some twenty-five years ago. Acquired by a marque enthusiast with the intention of carrying out a 'ground up' restoration to original specification, he sadly died before much work had been completed.

Determined that the Torpedo Tourer's highly prized 'Grand Sport' drivetrain would not fall prey to a special builder, the vendor - a renowned Salmson historian - then took over the project. Original body frame timbers were salvaged where possible and the car re-skinned in Pearl Grey fabric with new Black leather upholstery, Wilton carpets and front / rear double duck tonneau covers being fitted too (a copy of the factory build record shows that the car was finished in Gris Perle when new). The original engine was thoroughly overhauled with a new block and pistons. Displacing some 1400cc, the four-cylinder unit is fed by correct-type twin Solex carburettors which reportedly 'give a useful boost to effortless cruising'.

Attention was similarly paid to the highly desirable four-speed manual gearbox (which gained a new clutch), brakes, suspension and original wire wheels. The latter feature RAF hubs and were rebuilt prior to being shod with new tyres. A new loom was installed with authentic pattern wiring and the brightwork re-plated. The original supplier's plaque and switch panel were restored along with the superb Marchal headlights and white-faced OS instruments. Starting readily upon inspection and deemed by the vendor to be in 'very good overall' condition, this extremely rare and appealing Salmson has completed several trouble-free trips to France. A rare opportunity to obtain a lovely example of the French Grand Marques but at the fraction of a cost of a comparably rare Bugatti.
Share: