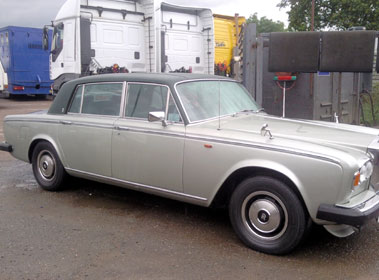 Inspired, at least partially, by a new generation of more driver orientated luxury cars as typified by the BMW 7-series and Mercedes-Benz S-class, the Rolls-Royce Silver Shadow II was announced in February 1977. While, these young pretenders could not be viewed as direct competition (if only on cost grounds), they illustrated the increasing importance that the buying public was placing on chassis dynamics. Thus, while the new model utilised the same four-door monocoque bodyshell, mellifluous 6750cc V8 engine and smooth-shifting GM400 series automatic gearbox as the outgoing Shadow, it gained a prominent front air dam, larger one-piece bumpers, revised front suspension geometry and - most importantly of all - power-assisted rack and pinion steering. Undeniably better to drive, the Shadow II further benefited from the adoption of a more ergonomic fascia and split level air conditioning. Still trimmed with the finest quality leather hides, wood veneers, chrome fixtures and carpets available, it treated occupants to a uniquely cosseting experience. Debuting alongside the Shadow II, the Rolls-Royce Silver Wraith II was near identical except for a longer wheelbase. Offering rear seat occupants an extra four inches of legroom, albeit at rather greater expense, it remained in production until 1980 by which time some 2,145 are thought to have been made.

Finished in silver with green leather upholstery, this particular example is described by the vendor as being in "very nice condition both inside and out". Riding on correct type steel wheels, it is offered for sale with "a tool kit, owner's manual, service history" and MOT certificate valid until July 2010.
Share: