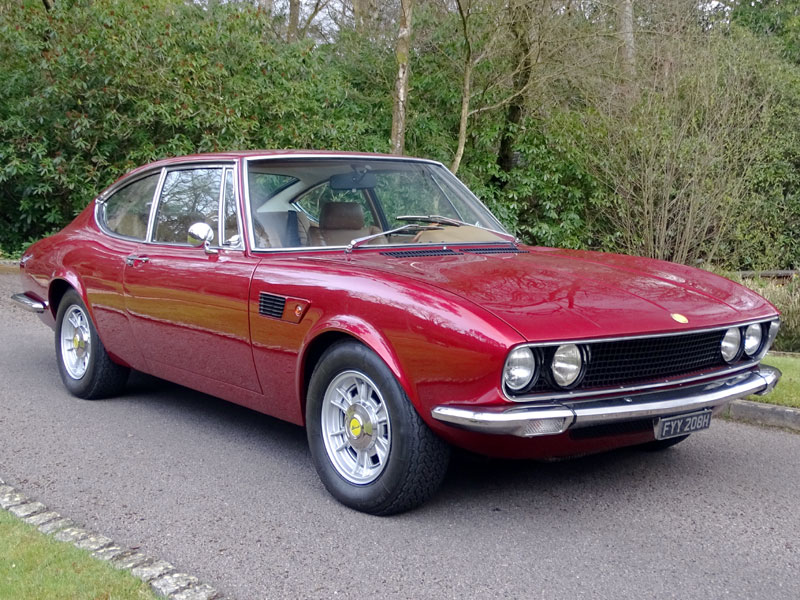 The Dino Spider was introduced at the 1966 Turin Motor Show. In common with Ferrari's much vaunted 206 and 246 GT cars, it was penned by Pininfarina who built the bodies too. It also shared their all-alloy, 4-cam, V6 engine; the fitment of which in road cars of the time was vital to Ferrari, who needed the powerplant sold in a series of 500 cars in order to homologate it for Formula 2 racing. Though designed by Vittorio Jano, the V6 engine was inspired by Enzo Ferrari's son Dino (Alfredo), who sadly died in 1956 at the age of 24 - the Dino branding employed for certain Ferraris and Fiats between 1968 and 1976 was a tribute to him. The Coupe body for the Dino was designed and built by Bertone and made its introduction at the Geneva Motor Show of 1967. The mechanically identical Coupe and Spider initially featured independent coil-sprung front suspension and a live axle set-up with semi-elliptic leaf springs derived from the Fiat 2300S at the rear. Braking was by discs all-round. The engine was of 2-litre capacity and around 160bhp. In 1969 assembly of both Coupe and Spider Fiat Dinos moved from Fiat to Ferrari. These Maranello-built cars benefited from a number of amendments including: the move to independent coil-sprung rear suspension derived from the Fiat 130, superior braking and cooling, the fitment of a new 5-speed ZF gearbox and an increase in engine capacity to 2.4 litres. This resulted in a welcome 20bhp hike; an output sufficient to accelerate the Fiat to 60mph in 8 seconds and on to 130mph.

The left-hand drive Dino 2400 Coupe offered is one of the best examples we have ever encountered. The car is understood to have started life as the property of Peter Sellers's son, and comes with a letter from Fiat to him confirming a built date of 1969 and its supply to a German dealer. 'FYY 208H' was imported into the UK in 1990 and has been the subject of an extensive restoration, which was completed by J.K. Engineering of Biggleswade, Bedfordshire. The work included: a bare metal respray in Red; a full interior retrim in Tan hide; and an extensive mechanical overhaul. This fine Fiat is now offered complete with history file containing a selection of invoices plus a fresh MOT certificate.