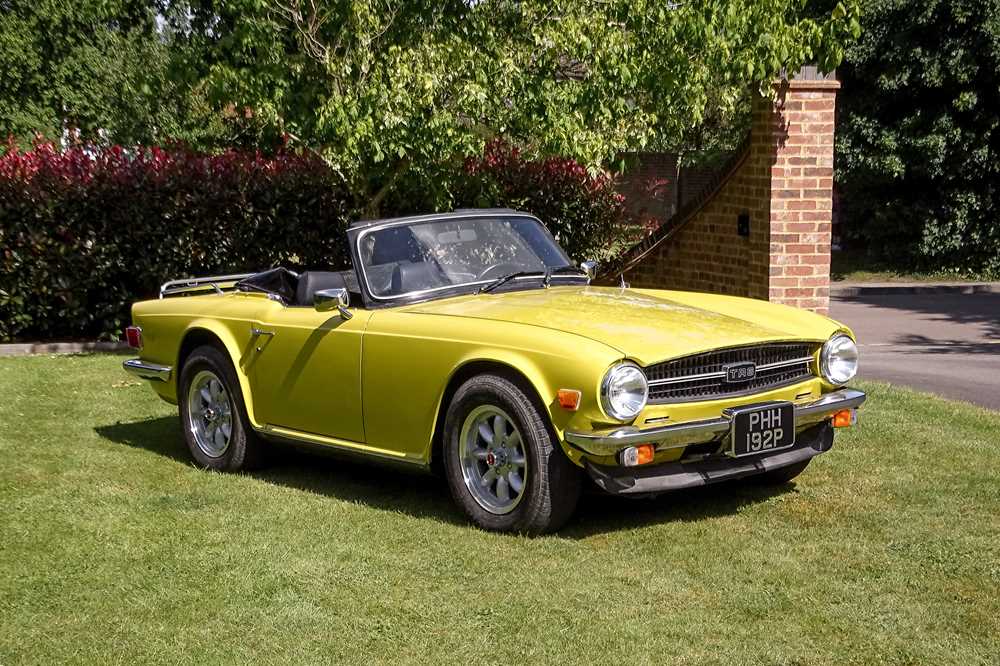 Introduced in 1968 as a replacement for the outgoing TR250 / TR5 PI models, the Triumph TR6 proved a strong seller on both sides of the Atlantic. Crisply styled, its smooth flowing lines and Kamm tail hid a rigid cruciform braced chassis equipped with all-round independent coil-sprung suspension, disc / drum brakes and rack and pinion steering. Powered by a refined 2498cc OHV straight-six engine allied to four-speed plus overdrive manual transmission, it was deceptively fast with contemporary road testers recording 0-60mph in 8.2 seconds and a 121mph top speed. Writing in 1969, Autocar magazine went as far as to comment that "Even if the Austin-Healey 3000 had not been dropped, the TR6 would have taken over as the he-man's sports car in its own right".

Presented in a striking Yellow exterior (thought to be Mimosa Yellow) with a Black interior, the car offered here was delivered new to the United States of America in 1976. To this day it retains its original left-hand drive configuration and all the DOT emissions equipment is still present and in working order.

The TR6 has benefitted from much expenditure over the last decade, including an engine overhaul, a new hood, retrimmed seats, a new exhaust, new wheels and tyres, a new fuel tank and sender and a new ignition. In recent months the car has undergone a professional repaint.

This particular example is described by the vendor as being in "very good" condition with regard to its engine, four-speed manual gearbox, electrical equipment, interior trim, chassis, bodywork, paintwork and wheels / tyres. It is presented with a large folder containing a sheaf of documentation and invoices dating back to 1977 together with both a hood cover and full tonneau cover.