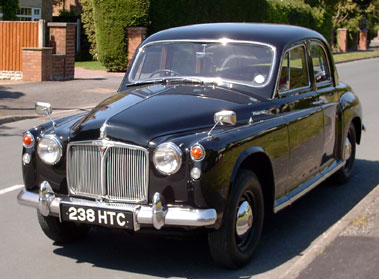 Unveiled to great enthusiasm at the 1949 Earls Court Motor Show, the Rover P4 was another brainchild of Spencer and Maurice Wilks. Heavily influenced in stylistic terms by the Raymond Loewy penned Studebaker Champion, its transatlantic lines clothed a highly competent chassis equipped with independent coil and wishbone front suspension and a Panhard rod located leaf-sprung rear axle. Introduced in 1957 the range-topping 105S (for Synchromesh) and 105R (for Roverdrive) variants used a twin SU carburettor-fed, higher compression version of their 90 sibling's 2638cc OISE straight-six engine. A novel form of automatic transmission incorporating a fluid flywheel and vacuum operated plate clutch, `Roverdrive' found comparatively few takers with the result that the 105R was dropped during 1959. Benefiting from the provision of overdrive on its four-speed manual gearbox, servo-assisted hydraulic drum brakes and a theoretical 90mph plus top speed, the 105S accounted for 7,170 sales and remained in production until 1960 (though, by then its `S' suffix had been discarded).

Finished in black with red leather upholstery, this particular example is described by the vendor as being in "excellent" condition with regard to its engine, four-speed manual plus overdrive gearbox, electrical equipment, bodywork and paintwork (while, he rates the interior trim as "good / original"). Reportedly "off the road for the last twenty-five years", `238 HTC' is also understood to have had just "six owners from new only three of whom used it to any extent" and to have covered "a genuine 64,000 miles". The subject of extensive recommissioning work over the last two years including "a repaint and steam-cleaned / treated / stoneguarded underside", the Rover is further said to have benefited from "a carburettor overhaul (new diaphragms etc) and brake system refurbishment (servo unit / master cylinder / pipes) as well as the fitting of a new thermostat and rear axle half-shaft oil seals etc". Apparently, "driving like new", now that in the seller's opinion, "everything which needed doing has been done", this delightful P4 is offered for sale with MOT certificate valid until December 2009 and historic class (free) road tax.
Share this page: